No doubt to most gamers watching the 2012 Microsoft E3 press event, the presentation of some actual video game related content after the 20 minute long speech about dashboard updates came as a much needed relief. This relief came in the form of the newest iteration of the Tomb Raider franchise. Viewers were treated to a short, albeit action packed sampler of the gameplay that Tomb Raider is going to offer. The demonstration opened out on a large jungle environment covered with trees and greenery. Enter stage left a young Lara Croft quietly stalking a small group of men who we can only assume are the generic villain of the day. 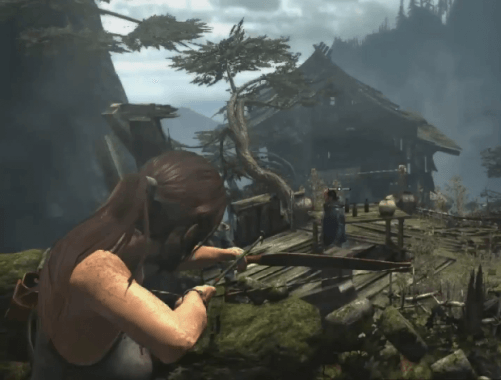 Taking a few pages out of the Farcry school of survival, we witnessed as Lara pulled a bowstring taught and left fly several death dealing arrows into the skulls and bodies of her stalkers. The next few minutes entailed Lara scaling a variety of natural and unnatural environments as she battled for life and limb. A combination of movement, action and quicktime events were required to traverse this harsh landscape.

If there was one thing that could be said for the gameplay sampler, it was that the whole thing was FAST. Like an action novel that doesn’t know when to slow down. If this is an indication of how the actual gameplay will fan out then colour me, and many other gamers impressed. The combination of fantastic visuals was clearly pushing the console to the limit of its graphics capability, but was able to do so without sacrificing pacing or gameplay or frame rate. If a demonstration’s purpose is to create hype for a particular title, then this has certainly been achieved!