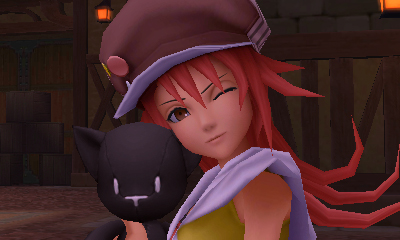 Those who are hoping for some special bonuses for pre-ordering Square Enix’s Kingdom Hearts 3D, also known as Kingdom Hearts 3D [Dream Drop Distance], will be happy to hear that Square Enix revealed today that anyone who pre-orders the title will be receiving a couple of AR cards to go with the game.

Everyone who pre-orders the game will receive a free card that unlocks the “R&R Seal Dream Eater” as well as a second card that will unlock one of three other Dream Eaters, either Ursa Circus, Sudo Neku, or Meowjesty. A final card will also unlock a viewing stand for 3D Dream Eater images. The Dream Eaters can be seen in the artwork below. Also released today are a slew of screenshots featuring charactesrs which can be met in Traverse Town, especially those from The World Ends with You.