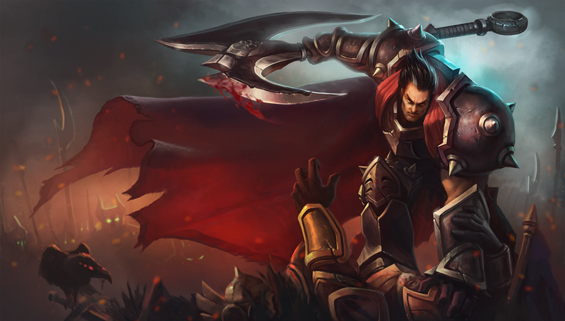 The Hand of Noxus is a deadly one indeed, and the Fields of Justice should keep an eye always locked on him. Darius gained his reputation by removing “weak” leaders of Noxus through means of violence. His weapons are fueled with over confidence and lust for a Noxian controlled world. Let’s delve into his abilities to investigate his ruthlessness.

Darius was orphaned at a young age left only to fend for himself as well as his younger brother. Upon joining the Noxian militia, Darius’s peers knew him to be relentless and bold. Darius ultimately earned his reputation by his actions on the battlefield against an overwhelming Demacian force. His captain had called for a retreat, but Darius was not one to admit defeat so easily. He took his axe in his arms, strode up next to his captain, and cleaved off the man’s head. The remaining forces were startled yet rallied to engage the oncoming Demacian forces under new command. Noxus won that day because of Darius’s mundane leadership.

Many have tried to contest the rule of Noxus, yet Darius did not want to bring down the leadership of Jericho Swain. The battle-rager saw success through Swain’s leadership and offered his services. Instead, Darius expresses his eager determination:

“A united Noxus could control the world – and would deserve to.”