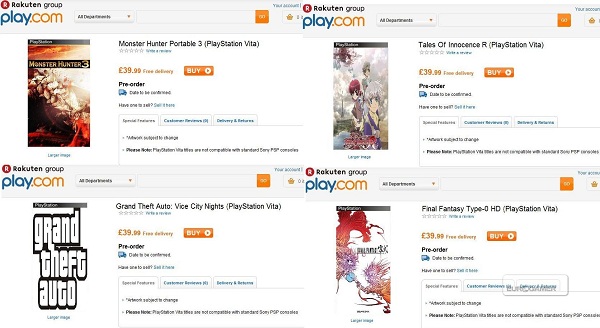 Woopsie… Play.com has outed the existence of a number of PlayStation Vita games before they were ever meant to be announced. These Vita games are Monster Hunter Portable 3, Grand Theft Auto: Vice City Nights, Tales of Innocence R and Final Fantasy Type-0 HD and they are all for PlayStation Vita. The listings have been taken down but not before being snagged by Eurogamer, though Monster Hunter Portable 3 can still be viewed here.

Out of all these titles only Vice City Nights is a newly announced title, with the others already released in Japan in other formats that don’t include the PlayStation Vita. With Sony meant to hold a PlayStation Vita Game Heaven where they will announce new games on March 9th, it is likely that all of these games will be part of that set of announcements.