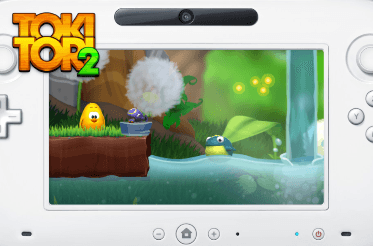 Toki Tori just has Nintendo written all over it, so its no surprise really that Two Tribes, who have released titles on the Gameboy, DS and Wii have a vested interest in making a sequel come true on Nintendos upcoming HD console, the Wii U. With very little information available at the moment, everything is a little speculative, with the news coming after Nintendo announced new strategies for its online capabilities and stores. It seems Two tribes see the 3DS store as a huge step in the right direction and assume Nintendo will follow suit with the Wii U’s online offerings. With the title relying heavily on online sales, choosing the right platforms for which to develop becomes a hard decision, with the quality and ease of delivering the product to market being of the utmost importance.

Two tribes see plenty of potential for the Wii U controller, already anticipating a smooth transition onto the platform in relation to controls, where the 2 analogue sticks would be perfect for stomping and whistling. Toki Tori has also specifically been designed to run without being a drain on the graphical interface, meaning it should look awesome on the controllers wide screen as well as on any large flat screen. Toki Tori’s uniqueness comes through the living environment players inhabit, where everything is used to solve puzzles, with very few limitations on what to do.  Apart from the fact their will be NO motion control and these small tidbits of information, not a whole lot is known about this title yet, but stay tuned for more news.