Boss Battles are right up there with jumping, points and blank wooden crates as examples of standard video game procedure. They’re in pretty much everything, and ideally test a player’s skills and abilities that they’ve accumulated during the game, as well as ramping up the tension in both the narrative and the game’s difficulty.

They’re also hard to write or talk about: being at the end of a game, they can often contain spoilers (watch out for those below, by the way), and everyone will have their own favourites. So while those listed here are my favourites, I’m by no means declaring them the best, or the most important, or anything.
I simply find these ones particularly fun, epic, or interesting in other ways. 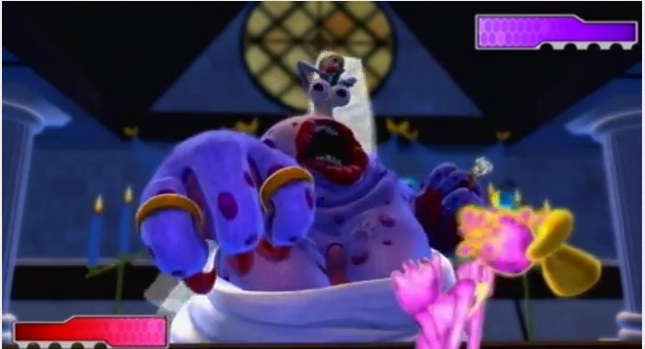 As with most comedies (in cinema and theatre, anyway), Ms. Splosion Man ends with a wedding. Well, it starts as more of a hostage situation/shotgun wedding, before our feisty heroine crashes the party, beats up the bride and steals her groom.

Obviously inspired by Punch Out, Ms. Splosion Man must block, duck and punch back at Splosion Man’s bossy, busty, blonde bride-to-be, until it’s revealed that she’s just the tip of the iceberg. In this case, said iceberg is a huge, scaly, purple… thing, with a killer uppercut, and extra arms where its boobs should be.

Once this thing is defeated, the happy Splosion couple – who, when you think about it, have never actually met before – elope, to live a high-energy life of splodin’ unsuspecting scientists together.

Traditionally, boss battles have players use all the skills taught throughout the game, in one last high-stakes fight to the death against the main antagonist. Beating up the bride-beast here may introduce new player skills, and pit them against a character we’ve never seen before, but it maintains the game’s sense of ridiculous fun, conforms to the traditional theatrical/cinematic definition of a “comedy”, had an awesome, ominous-sounding rendition of the Bridal March as the battle music, and is just damn fun to play. 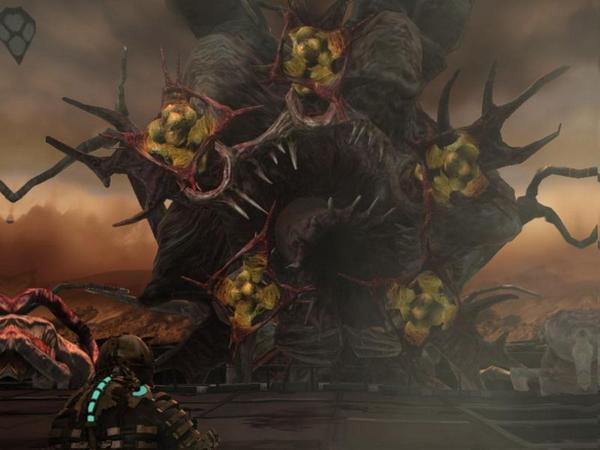 One thing that made Dead Space effective as a survival horror game was the ability of the enemies to absolutely ream you without warning. Some of the baddest bad guys could tear you several new orifices before you even realized you were in danger. These things care not for your cries of “But my health bar was still in orange!” Health bars are meaningless when your head is close enough to kiss your toes without needing to bend over.

By the time you reach the end of the game, you’ve earned your escape, if only through the amount of underpants you’ve ruined during your journey. But before relative safety can be reached, you have to contend with the huge amorphous blob of tentacles and glowing weak spots that is the Hive Mind.

It starts off simple enough: shoot it in the glowy bits while avoiding its whipping tentacles. But after a few hits, one of those tentacles wraps around your foot and flings you into the air, dangles you above a gaping chasm overpopulated with teeth, and slowly, suspensefully, starts lowering you into it.

You keep trying to shoot the glowy eye-bits, but it’s harder now that you’re being shaken around like a rag-doll. And again, health bars mean nothing once you’re in that cavern of unnecessary numbers of teeth.

This one’s on this list purely for its epic scale, and the manner in which it continues, and escalates, the sense of helplessness that permeates the whole game. 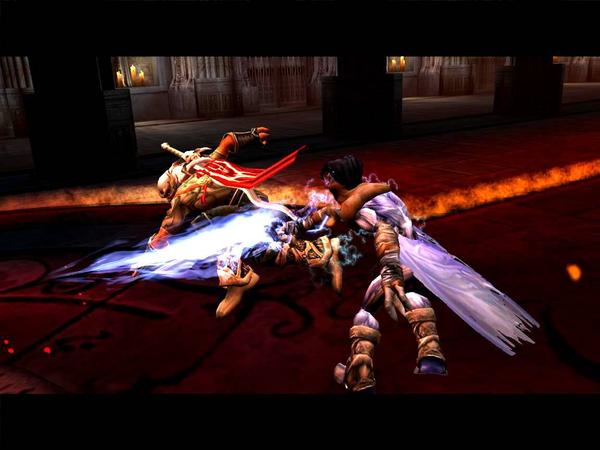 The Legacy of Kain series has an interesting protagonist/antagonist balance. In the Blood Omen games you play as Kain, the vampire leader of sorts. In the Soul Reaver games, Kain is now the bad guy, and you play as Raziel, his primary underling, trying to hunt him down. And in Defiance, the fifth and final game in the series, you alternate between both, as they track each other down and try to figure out the nature of their intertwined destinies.

Towards the end of Defiance, the two finally meet again, and battle it out in the cathedral. At first you play as Raziel, and must incapacitate Kain, while he uses all the moves you the player granted him through the course of playing as him in the game.

Once you beat him, another cutscene follows with a bit more story, and as the dynamic of the dialogue changes, Kain suddenly has more of the power in the duo. As Raziel begins to get aggressive again, you play as Kain to smack some sense into him.

While the actual mechanics of the battle are nothing new, the scene is particularly interesting in a narrative sense; the showdown between these two has been built up to for the duration of the game, as well as parts of the previous ones.

Not only that, but the unique occurrence of playing a boss battle from both perspectives as the power of the scene changes sides, and neither character is clear-cut good or bad, is something I don’t remember seeing in any other game. 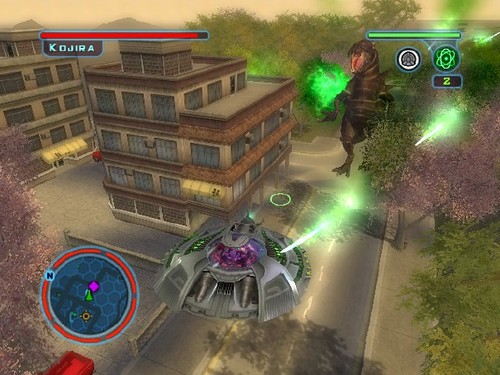 Bearing no resemblance to Godzilla in any way, Kojira is a giant mutant reptilian creature that Crypto encounters in Japan, during his invasion of Earth. The battle plays out like an old monster movie, and ends with the total destruction of the city of Takoshima. Crypto has to take to the skies in his flying saucer to stand a chance against Kojira, but quickly learns that the monster can (somehow) replenish its health by destroying buildings. What ensues is a race to destroy every building in the city before the other does, while periodically stopping to do battle directly.

While you have been destroying humans and buildings for the majority of the game (and the previous one), this battle feels suitably epic, oozes Cold War-era monster movie cheesiness, and provides a strangely satisfying incentive to keep destroying all humans. 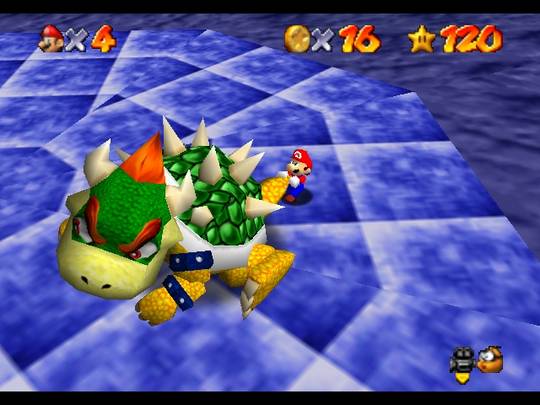 It may seem simple by today’s standards, but Mario’s final showdown with Bowser in the Nintendo 64 classic perfectly captured what made the game so special – namely, traversing a three-dimensional space. Previous encounters with Mario’s persistent nemesis had all occurred on a 2D plane, and usually involved jumping on him three times at certain points in a pattern.

This time the designers clearly had a good hard think about how to translate that kind of gameplay into 3D: as such, Mario needs to run around behind Bowser and grab his tail, swing him around in an arc and throw him into bombs that line the circular arena. The image of Bowser being swung around was iconic of the game, and the battle, while simple, kept in line with the series’ style, cleverly brought it into the third dimension, and perfectly capped off a truly revolutionary game.

Team Bondi sells off IP and lets go of staff