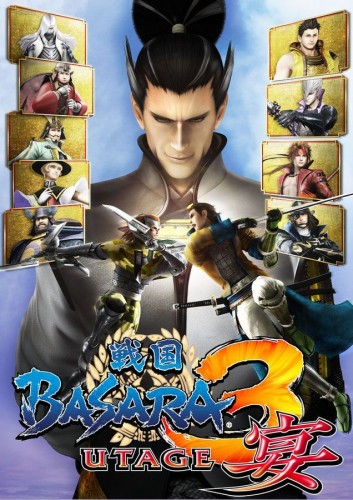 Sengoku Basara: Samurai Heroes (also known as Sengoku Basara 3 in Japan) hit the West on October 12, 2010 with unfortunately abyssmal sales.  Because of the low sales (due to absolutely no marketing in the West) Capcom has unfortunately decided to not release Sengoku Basara 3 Utage (also known as Sengoku Basara 3: Party) in the West.  For those who have no idea what the Sengoku Basara franchise is (that would be the bulk of you), it’s basically Dynasty Warriors except that it’s made by Capcom and deals with Japanese history (the Sengoku period) instead of Chinese history.  Oh, and the combat is way more in depth and satisfying, but we’ll get to that.  Tecmo Koei does make a game that deals with Japanese history (also the Sengoku period, with some characters from other periods thrown in) called Samurai Warriors, but that follows the same basic structure as the Dynasty Warriors series.

The story behind why you may have never heard of this franchise is a bit of a sad one.  In Japan, the first installment (on the PS2) is simply called Sengoku Basara, but in the West it is called Devil Kings (and the name isn’t the only change it brought with it).  With Devil Kings came significant changes to the game.  Some sources indicate this was done to prevent comparisons to Tecmo Koei’s Samurai Warriors, others say it was done to the ensure that the Western audience wasn’t put off by the overt Japanese themes the game brought with it.  An interview with the game’s producer, Hiroyuki Kobayashi, reveals that they wanted the Western version of the game to be darker.  Whatever the reason, the game was a mangled mess by the time it reached Western shores.  Much of the scenery and level design was changed to avoid looking as if you were in Japan.  Japanese architecture turned into boring castle walls and bland hillsides, footsoldiers were turned into demons, anubis and robots, characters were given odd personalities and very generic backstories.  The difficulty was made signficantly easier for the West (as was the trend back in the day) and several characters were even cut from being playable, though still remained in the game as enemy NPC’s.  All in all, the game was awful compared to what it originally was though the combat was still fun and enjoyable, save for some core changes they made to each characters playstyle to make the game easier (called priming, but it’s not important).

After the commercial failure that was Devil Kings, Capcom forwent the Sengoku Basara franchise in the West, releasing several sequels in Japan (with much success).  For reasons unknown, Capcom decided to try out the franchise in the West again last year with Sengoku Basara: Samura Heroes (Sengoku Basara 3) and decided to not change a thing from the Japanese release.  The characters were all the correct names, all had the same combat, they kept in all of the Japanese influences and stories and quiet honestly it was incredible except for one problem.  They didn’t market it at all.  As a result it didn’t sell at all.  Now I’m not a business wiz like Capcom’s Christian Svensson, but I’m pretty sure if you are going to localize an established franchise to a foreign market, you need to inform said foreign market of the game and why they will like it.  I believe that concept is called marketing, but hey, I could be wrong.  When asked why this game isn’t coming to the West, Svensson replied back with a pretty adamant “you guys had two chances to prove to us that you wanted this series, you aren’t getting any more” vibe.  And so with that dies the Sengoku Basara franchise in the West, again.  Maybe in another couple of years, after another several sequels are released in Japan, Capcom will decide to grace us with a third chance (hopefully with a better thought out strategy than “let’s silently release this and then blame the consumer for not knowing about it”).  Interestingly enough, the Sengoku Basara anime’s second season was just announced to be localized.  How’s that for mixed messages?

So now the only way to experience this great change of pace from Tecmo Koei’s Warrior franchise is in Japanese.  Luckily it’s a combat driven game so it’s still playable without knowing any Japanese, though you are definitely going to miss out on the interesting stories that unfold as well as some of the finer nuances to the combat.  But let’s get down to it, what’s the difference between Sengoku Basara and Dynasty/Samurai Warriors?  Well, for starters, if you’ve ever played one of Koei’s Warriors games then you know that each and every character follows the same basic combat routine (known as the charge system).  You mash the attack button one to six times, finishing the combo at whatever interval you chose with a charge attack.  Each character has their own unique weapon and combat style (except in 7 where the weapon they use determines their fighting style, effectively cutting the variety down) but they all play the same, more or less.  It all boils down to the player putting in the exact same button inputs over and over, adnauseum.  The difference with Sengoku Basara is that each character has their own, unique fighting style with no two characters playing alike, which sounds a bit like Dynasty Warriors’s concept but keep reading.  The combat is a bit like Devil May Cry, in the sense that combos are more the name of the game rather than forcing the player to end each and every combo within 6 attacks, a la Dynasty Warriors.  The enemies are still frail and numerous (save for the other generals) so it’s not going to play much like Devil May Cry, but the combat is definitely faster and more action packed.  One character might be able to teleport a short distance after each attack, linking into a new attack, allowing you to shoot around the battlefield while another might summon dozens of demonic arms all at once to attack.  Basically what I’m saying is, they each have their own moveset that you get to level up (a little) and customize (a little).

Another significant difference is the overall style of Sengoku Basara (Basara actually means stylish).  Dynasty Warriors, while certainly over the top with it’s concept of one general felling thousands of soldiers in a few swipes, lacks the same pizazz that Sengoku Basara has.  Capcom has taken some of the more iconic warriors from the Sengoku period and given them some very affective flair.  Nobunaga, for example, is well known for his ruthless as a warlord and so Capcom went the extra mile and basically turned him into the Devil, granting him demonic powers and just a very sinister aura.  Similarly the legendary warrior Honda Tadakatsu, known for his immense prowess in battle and legend that he came out of the war without ever receiving a wound, is a monolithic robot in Sengoku Basara.  These are just two characters, though I would say they are the most noticeably altered from what we would consider “the norm”.  Aside from the changes to backstory and lore, Sengoku Basara is very colorful, with attacks being eccentuated by the reds of fire, blues of ice, yellows of lightning, etc., depending on what element your player is.  It’s all done so that combat is not only in depth enough to grant the player a decent challenge but that it looks great while you are playing.

So what’s new in Utage?  Well, Utage is sort of special in that it’s basically an expansion, like Monster Hunter Unite or Fable: The Lost Chapters.  What this means is that it contains everything that the previous game had, but has more content and has the ability for you to transfer your save.  So for starters, many characters that were in SB3 but were unplayable are now playable characters, some making their debut as a playable character (even though they have been there as a story character for several installments). Along with that are new stages, more weapons, a harder difficulty, more allies, basically a ton of extra content that’s been added on to an already fantastic game (just that it’s in a language that you likely can’t understand).

Alright, enough text.  I’ve been rambling about the series for too long now, check out the stream (which I should be able to maintain for most of the day) to see what the game is like in action.  Keep in mind it’s in Japanese, which shouldn’t prove too much of a burden but I might need to take a quick look at some translation sheets to figure out what I’m doing.  Enjoy!

Update:  Stream is over for now.  Thanks to those who checked in.  For those who missed it, I’ll be streaming this over the course of the next few days so keep an eye out.