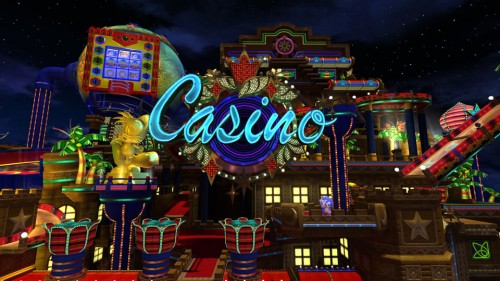 It might not have made the Playstation 3 and Xobx 360 versions of Sonic Generations, but Sega is determined that fans of Sonic The Hegdehog 2 won’t miss out on a favourite stage. The famed Casino Night stage is coming to the console versions of Sonic Generations. It has been included in the 3DS version of the game. However, it will be different to the stages of the game. Sonic will be forced into a small ball for a pinball-themed level. However, the slot machine does make an appearance.

Also included in this downloadable pack are three costumes (Amy, Sonic and Super Sonic) for Xbox avatars and custom themes for both the Playstation 3 and Xbox 360. All of this stuff is available on both Xbox Live and PSN in Japan right now. The avatar costumes cost 240 MS Points each, themes cost 240 MS Points (one theme only) or ¥200 each (two themes available) and Casino Night costs ¥350 or 340 MS Points. No word on when these items will hit Xbox Live and PSN in North America, Europe and PAL territories.