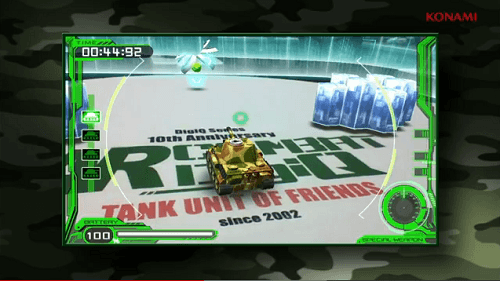 AR Combat Digi Q: Friend Tank Battalion is one of Konami’s Playstation Vita launch titles. It is also a downloadable only title. It will use the Smart AR technology (meaning that you can play battles anywhere you want using AR) and it is based on Konami’s Digi Q infrared mini vehicle series. The game will be comprised of forty stages, which will be offered in bites. Although most stages will be at a price, the initial offering will be free.

Stages one to five will be offered at no price at all to give players a taste of the game. The first stage pack will consist of stages six to thirty and will be offered at ¥800. However, Konami will offer that pack at a discounted price of ¥500 from launch day to January 16. Stages 31 to 40 will be offered in two packs of five stages at ¥200 each. Now that is quite a bargain.

AR Combat Digi Q: Friend Tank Battalion will be available only on the Playstation Vita on December 17.