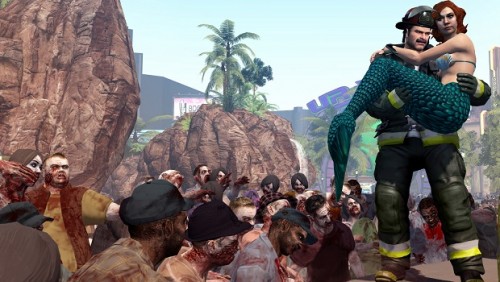 There has already been a plethora of DLC packs for Dead Rising 2 Off The Record since the game was released, but none of them are quite as interesting as the two released today. However before we get into the most interesting one, let’s learn about why Frank is dressed as a Fire Fighter up there.The Fire Fighter Skill (160MSP/£1.69) pack which costs 160 MSP or $2 will give Frank a boost in speed while carrying or helping survivors, allow him to kick open doors and immunity to any fire damage. Plus he comes with a mustache as well.

However if you want to break your game a bit, then you may want to download the Gamebreaker pack which costs 400 MSP or $5. This Gambreaker pack will do exactly that, make it extremely easy for you to win and break the game’s difficulty, not that there was much. The bonus content added will be Super Speed, Super Damage, Instant PP, stupider zombies, and even a God Mode where you will be able to just kill everything in sight. Sounds like this would be the pack for anyone who just wants to have a good ol’ zombie killing time with little to no risk themselves.

Cook the undead with the BBQ Chef pack in Dead Rising 2: Off the Record