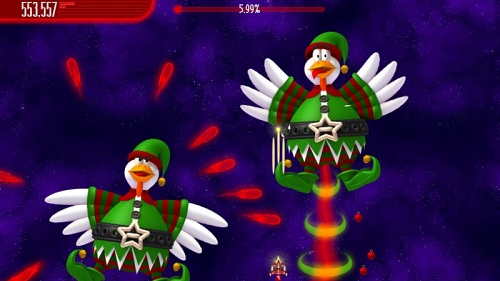 A Christmas edition of Chicken Invaders 4: Ultimate Omelette is now available on InterAction Studios’ official website for the PC. In the world of Chicken Invaders, chickens from outer space are seeking vengeance for their Earth counterparts. It’s bad enough that Earth chickens get their eggs taken from them, they get eaten! The eggnogs, scrambled eggs, sausages, chicken fillets, fried chicken; you know what I’m talking about! It’s time to avenge their fallen brothers and sisters and defeat the humans!

In Chicken Invaders 4: Ultimate Omelette Christmas Edition, the space chickens are back and have devised a new plan: to destroy Christmas by encrusting humanity in an impenetrable wall of egg white! With an egg canon capable of firing planet-scaled eggs to achieve this devious scheme, it’s the player’s job to explore galaxies to find and destroy the egg canon and defeat festively dressed space chickens along the way. Be wary of Christmas elves, Santas and other holiday figures, they could be evil space chickens in disguise!

Features of Chicken Invaders 4: Ultimate Omelette Christmas Edition include: up to 4 player co-op; 12 star systems to explore; 10 different weapons and 12 weapon upgrades for each; 120 waves of invading chickens; and over 20 minutes of original orchestral soundtrack.

TERA is Coming to Europe