Even though the 3DS hit quite a slump earlier this year and left a sour taste in investor’s mouths, the little handheld that could is now picking up full steam as last month it sold over 240,000 units due to it’s new low price. Now we all know that Mario, Luigi, Pit, and several other Nintendo greats are looking to make a comeback that should skyrocket sales this holiday season and into early 2012, but I am now wondering what will come after that. I mean, sure, those properties will sell no matter what, but what will keep the 3DS fresh after the winter rush finishes?

Just for fun, let’s take a look at what would be some fantastic additions for the future of the 3DS’ life-cycle. 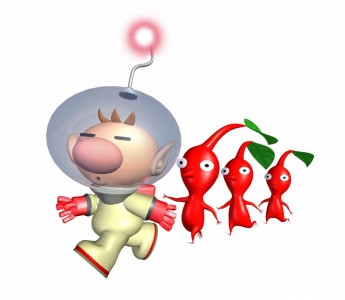 Here is a no-brainer. Since the release of Pikmin 2, fans have crossed their fingers for more information about an ineveitable sequel and have only received teases from Miyamoto. We know it’s coming, we just don’t know when or how Nintendo will go about delivering a follow-up.

While Pikmin 1 & 2 were great, I really don’t feel like the memory of those Gamecube classics alone will sell the sequel in masses to the general public. Before you grab your pitchforks though, I still feel like Pikmin 3 would perform wonderfully if Nintendo act quickly. You see, the last time gamers got a chance to see Olimar, it was in Super Smash Bros. Brawl, which sold over 10 million copies since release. That means that 10 million sets of eyes have seen our Pikmin friends, whether they played the originals or not. 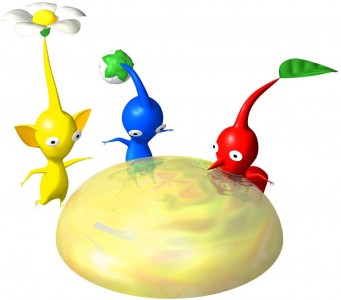 We still don’t know when or even a proper “if” Pikmin 3 is in some sort of development, but as long as Olimar is fresh on the mind of the masses, there won’t be much of a problem in getting 3DS oweners to spend their cash on a follow-up. 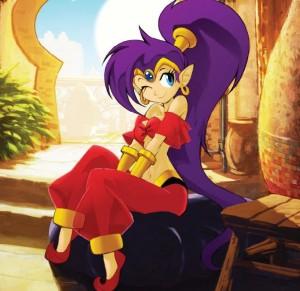 WayForward have already made their mark on this generation by releasing some of the highest rated licensed titles and remakes we have seen, period. They turned Thor into a 2D beat-em-up which was critically praised by all on the Nintendo DS, A Boy and his Blob turned out to be a savory treat for the Wii, and the more recent Aliens: Infestation gave us a Contra-Metroid hybrid experience that turned out to be one of the richest 2D titles we have seen in years. All of those fantastic titles are nothing compared though to the imaginative originals that this little studio have produced.

I have said it before, but I truly believe that Shantae is the official mascot of the entire DSiWare service. This little half-genie seen new life of handhelds last year with the release of Shantae: Risky’s Revenge, which still remains as the most substantial title on Nintendo’s digital platform (You can check out our review here for reasoning behind this comment). If WayForward delivered a sequel in cartridge form, there is no telling what these innovative developers could create.

When I think of Shantae, I think of nothing but potential. If WayForward did a 3DS version of the classic in some form, it would boost the character’s popularity even greater, and we could see an entire franchise take form in just a short time if promoted correctly. I think Mario, Sonic, Donkey Kong, and the other mascots from Nintendo are fine, but Shantae has all of the goods to have her name on countless spin-offs, sequels, and merchandise that could turn the cult favorite into a mainstream phenomenon. 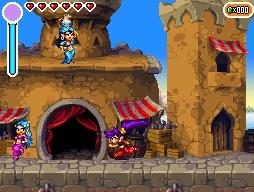 Shantae has proven her credibility twice so far, so just maybe we can see some publisher make that investment down the line to bring this genie into a whole new dimension.

As much as I love Rare, things have not been the same in the past few years for the same company who carried much of the Nintendo 64’s successes on their back. Even with that said though, Viva Pinata and it’s sequel were superb and two of my favorite titles this generation, and I actually enjoyed Perfect Dark Zero for what it was as well. That same ingenuity and imagination can still be found in the likes of Kinect Sports or with any release Rare cook up these days, but there isn’t much doubt that the industry icons still seem a little out of their element with Microsoft’s Xbox 360 as the system itself as it is mainly targeted towards older gamers and families who use the Kinect. Walk into any game store and recommend Viva Pinata to any 19 year old male, and they will usually give it a chuckle and walk towards the shooter section. It’s sad to see such creativity go unappreciated.

This is just a dream at this point, but I would love to see Nintendo reunite with Rare. Not just for Donkey Kong, but to revive familiar faces from the past while tapping in on Nintendo’s younger age market with brand new brands.

Rare have several franchises under their belt that have been simply begging for another chance. Let’s start off by taking a look at what could easily be revived for Nintendo’s 3D platform. 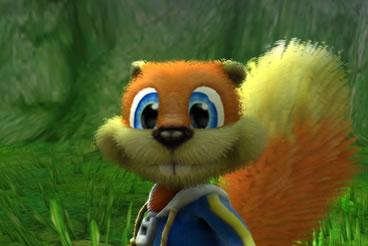 When Conker’s Bad Fur Day was originally released back in 2001 on the Nintendo 64, the game instantly garnered a huge cult following due to it’s foul mouthed mascot. The in-game world was large, open, and colorful and the complete cast of characters seemed to hate life because of it. If you remember, this was the age of platformers (which Rare themselves helped build), so the entire experience was almost a parody of the norm and the dark humor within just worked so well due to the brilliance in Conker’s writing and execution. 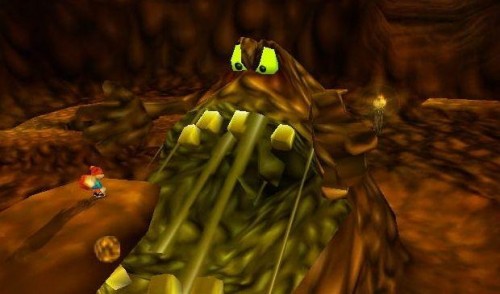 Nearly a decade has passed and we have just seen one (censored) remake from the tenacious squirrel, which is a bit disheartening to say the least. What would Conker have to say about the past generation of family titles and motion-controlled shovelware? I think we would all know the answer, and I would love to hear it stated in a follow-up on the 3DS. Just in case you may be questioning this choice based on the ending Conker’s Bad Fur Day, this is still the world of video-games and I am sure Rare could easily conjure up some campy reasoning to revive Conker for one more go-around.

Banjo makes this list for a number of reasons. It was one of the best platformers ever built, it spawned an even better sequel, and Jinjos simply belong on a Nintendo platform, period. By saying that I don’t want to take anything away from Nuts & Bolts, as there were some brilliant ideas present, but that title didn’t have the same feel(or concept for that matter) as it’s far superior predecessors. The 3DS however would be an ideal platform for the franchise though as we have already seen a number of well-made 64 ports that have utilized the handheld to pull off successful revivals. 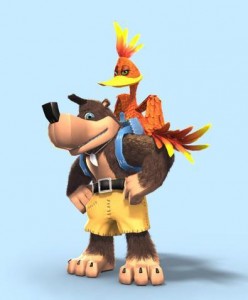 Just look at any of the Banjo titles though. The slide-pad would work perfect for mimicking the fluidness of control we seen on the N64 and the 3D could be added in to make the entire world “pop” off the screen. Banjo-Kazooie was also a game about collection, whether it was music notes or Jiggys, and a simple online leaderboard could add in a new competitive flavor into the experience, better rewarding the completionists that partake in the journey. These of course are just a few ideas but if everything was executed correctly, the classic pairing would could see another wave of fame and recapture their thrones of Nintendo platforming royalty. 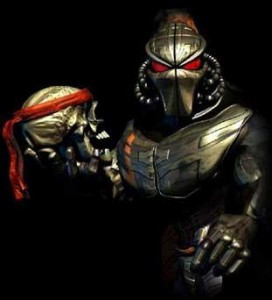 As I am writing this, we have seen three fighting games released on the 3DS in just seven months of time. These titles all performed well and have been critical successes for the most part, as each (sans Blazblue) capitalized on the online functionality and utilized the entire button layout provided to pull off a polished control scheme. Nintendo’s handhelds haven’t been well fit for the genre in the past, but if the 3DS has proved anything as of yet, it’s that it knows how to handle a good fighter.

Rumors of Killer Instinct 3 have been spinning for years now and a console would be the perfect way to go if Rare were to make their move on reviving the series. The 3DS however offers a cheaper development option that could at least give fans something to chew on until that grand title is crafted. Orchid and Fulgore in 3D would look amazing as it stands, but if we seen the same love given to Killer Instinct that was given to Street Fighter IV 3D, the result could be phenomenal. Streetpass battles, 3D rendered cutscenes, and even a newly revamped story mode could make this series relevant again and would reintroduce the famed series back to the fighting market that have their wallets open, ready to take on that next great challenge.

All three of these titles are just pure examples at what Rare could revive with the 3DS’ technology, but there is no doubt the ambitious developers could craft some brilliant originals as well that could finally trigger the entire market to follow by example which in turn could lead to a library of gold for the platform.

And then there was Toad…

Poor Toad. Even though he has been in nearly every Mario title to date in one form or another, we have never seen an original creation based upon one of the most familiar and beloved faces in gaming. The question is, would a Toad game sell? 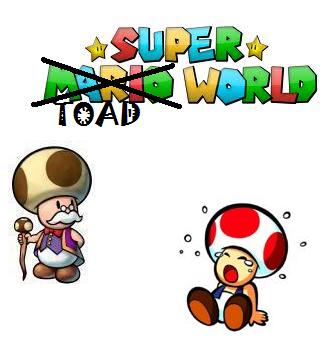 My main idea comes in the form of an RPG. We all know there is plenty of Toads in the Mushroom Kingdom, with the most prominent face being Toadsworth. A brief concept would be to have Toadsworth get kidnapped (Peach style) while Mario was…plumbing or saving the famous Princess. This in turn could have Toad and Toadette set out to save their elder throughout many famed locations from the franchise, partnering up with lost and unwanted characters that players have not seen since their debuts (Mallow and Geno from Super Mario RPG come to mind).

Nintendo could make him paper, make it a platformer, or even a puzzle game. Toad deserves an attempt at an original IP, and that face would sell a game, regardless of the genre.

Now we would like to get some of your opinions and thoughts. What titles (or personalities in general) would you like to see brought to the 3DS’ growing library?