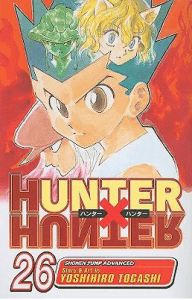 In the latest chapter of Hunter x Hunter, a new story arc begun, that arc being the Chairman Election arc. Several new characters were introduced as part of the Hunter Associations 12 elite hunter group, The Hunter Jyuunishin (12 Zodiac Animals). Each of the new characters represent an animal of the zodiac, excluding one, that being none other than Gon’s father, Ging Freecss.

In Ging’s first physical appearance, he announces his candidacy to replace former and late Chairman Netero. That is were the complication arrises. The end-point of this series, is Gon finding his father Ging. However if Ging becomes the Chairman of the Hunter Association, which at this point is honestly very likely, Ging would be out in the open for Gon to find him, but unless you take into account the final conditioning for how the election is to be held, he may not be the only candidate possible to be elected as the new Chairman.

The way it was decided the election should be held with every Hunter in the world being both a candidate and a voter. This essentially could mean that anyone could become the next Chairman. This opens things up to several possibilities if you take into account that it would obviously (if being anyone besides Ging) be a previously introduced character. The possibilities that first spring to mind are characters such as Chrollo, Satotz and Killua’s father. In my opinion besides Ging they are the next immediate choices. However since Ging taking the part of Chairman would mean revealing himself to Gon, leaves me thinking that Chrollo may find a way to be elected, thus bring Kurapika back into the mix and causing a stir with the Hunter Association.

But where does the series go once the next Chairman is decided and what will happen with Gon in emergency care?

Well taking into account that whoever takes over as Chairman is bound to cause a stir and would perhaps set off a chain of events that would bring our main cast back together. I am guessing the Chairman will be a former antagonist in order to create a reason for the main characters to get involved in some manner.

As for Gon in critical condition, I suspect Leorio will make his long awaited return, finally having learn Nen. What will his Nen be? I am suspecting it will be a type of healing based Nen. Afterall he wanted to become a doctor. Who better to heal Gon? I highly suspect Killua was calling Leorio.

To be bring this back to the Chairman Election, some people believe that if Ging is elected, that Hunter x Hunter may be nearing it’s end. I however think there is far too much left unresolved for the manga to be even close to it’s end. For instance, there are several hanging plotlines right now, such as: Kurapika’s vendetta against the Phantom Troupe, Killua’s desire to take vengeance upon his family for his brutal torture since birth, Hisoka and Gon’s rematch, Leorio opening his free medical clinic, Chrollo breaking Kurapika’s Nen binding curse and of course Gon finally finding his Father Ging.

There is simply too much currently unresolved for Hunter x Hunter to be even close to it’s end. Which leads me to the conclusion that we still have a long road ahead of us before this manga’s final page is turned. What do you think of the future of Hunter x Hunter? Let us know in the shout box or comments section below.