We all know that the world of Skyrim is going to be a huge one, with plenty to see and do and hundreds of hours to waste roaming the countryside. But now it seems that the world map for The Elder Scrolls V: Skyrim has been revealed a bit early, and we can now see just how the map will look when it is released next month.

This map was revealed at the Igromir Expo in Russia and given to those in attendance, and then it has been translated into English by a Russian/English website to let us know just where a few of the landmarks are. Now the map doesn’t contain any actual dungeons or small settlements one may stumble across but it does reveal landmarks and major cities that can be traveled to. Click the map below to view it in all its fullscreen glory. 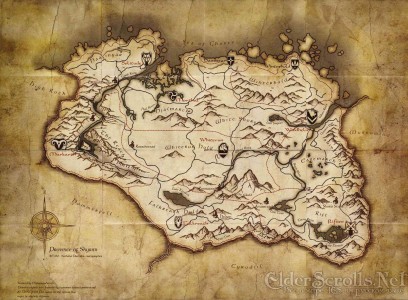