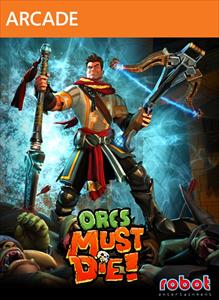 Orcs Must Die! is a game about Orcs. Yup, that was a tough one, I know. All right, so Orcs Must Die! is actually about you getting to kill a whole ton of Orcs with lots of cool different items. At its core, Orcs Must Die! is a tower defense/strategy game, except instead of an overhead view of the battleground, you control a single character from the 3rd person perspective.

Orcs Must Die! was developed by Robot Entertainment, which is comprised of many of the former people who worked on Halo Wars and Age of Empires III. Suffice it to say, these guys know what they are doing when it comes to strategy games. Or do they? Read on to find out! 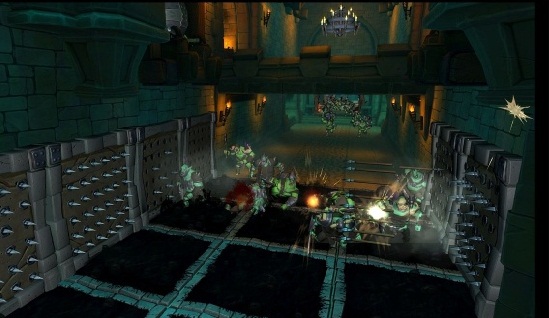 At the beginning of the game an old War Mage is narrating his own death. As he lays at the base of some steps, bleeding out of his head, he reflects on his life and the many battles he has fought to keep the Orcs at bay. The Orcs live in a wretched, dead world and they want to go to other planets. To get to other planets, the Orcs (as well some Ogres, Demon Rats and Hellbats) must pass through what are called Rifts, which are similar to teleporters. However, The Order —a band of soldiers who use traps, weapons and magic— have sworn to protect the human race from these invaders. The War Mage is part of the The Order and he has an apprentice. As he dies, he tells us that now that he is gone, the human race is doomed because his apprentice, the main character, is taking over and that his apprentice is more or less a fool. And then the scene fades out and you find out that you are controlling the “fool.” But you are no fool, are you? That’s what I thought.

All in all, the story is ok. Although there are some serious plot holes, the story generally makes sense as long as you don’t take it too seriously. Honestly, the developers didn’t mean for the story to be held up to a magnifying glass in the first place, and it is only there to provide a framework for the gameplay. Nevertheless, the story did leave me hanging in a few places and I would have appreciated a little more detail about what was going on. But I suppose I can’t have everything. 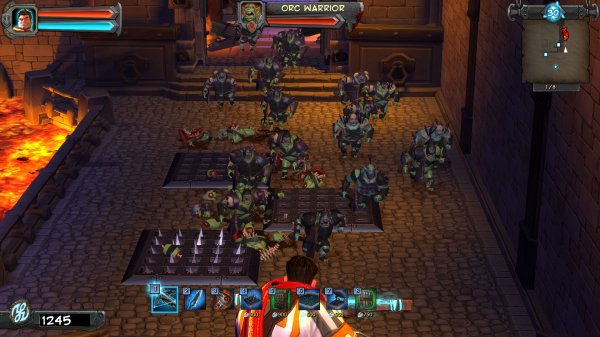 At the beginning the game thrusts you into the thick of it with nary a tutorial to be seen. Although you can go hunting through menus and the like, it is pretty easy to learn how to set up traps and use your automatic crossbow and/or sword.

Starting off, your goal is merely to protect one portal with a couple of traps and your weapons. Later on however, there may be multiple portals and a variety of pathways for the Orcs to get through. Making your task even more difficult however, is that your weapons will be of little use to you unless they are used strictly for mop up. Yes, this game wants you to use traps at all times. And that is great. There are many traps of different sorts (although unlocking them all is a tedious process) and when they are set up just right, it is a wonderful sight as you watch a plethora of Orcs, Ogres and other baddies meet their untimely, gory doom.

Nevertheless, as I kept going through the game, I couldn’t help feeling a tad disappointed. I hated how I could not save load outs and had to choose 6 or 7 traps and weapons before every level. Plus, there are hardly any other weapons to play with and although you can upgrade the traps, it is a time consuming and expensive process that often does little to change up the gameplay. Many times I felt like I was mindlessly mowing down enemies with no real strategy. Furthermore, although you do get a slight extra reward for headshotting an enemy, there is not much else to be earned in the way of bonuses. Even combo kills and kill streaks are hardly given any attention. It would have been great if there was some depth in these systems. Nevertheless, once you unlock a new trap at the end of a level and then see it in action in the next level, the game redeems itself.

However, there is one more area in which this game could have been better. One omission from the is unforgivable. The lack of any sort of coop in this game is a sin of the most maximum kind. Although Robot Entertainment has said they are looking into the possibility of adding it in, the lack of it is astonishing and makes me feel like perhaps the game was rushed out of the door before it was ready. 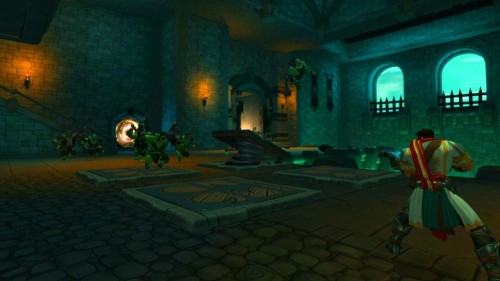 The soundtrack in the game is absouluty fantastic. I couldn’t say better things about if you payed me too. There are a variety of mixes in the game, and it was evident that whoever who directed the music in this game had a creative streak in them. My speakers were jamming with the mix of rock, rap, folk and other beats. To make it even better, these different genres were often mixed together to create a brilliant compilation of awesomeness. Complementing the soundtrack was some solid voice acting. Although there was not a whole lot of dialog in the game, what little there was sounded great. In addition, nearly every statement was funny. At the beginning of every level the Apprentice would crack a joke or make fun of his now dead master. In addition, the Orcs would often say hilarious things as they died, like, “Today was my last day before I retired.”

Unlike the great sound in this game though, the graphics were unremarkable. That’s not to say that everything looked terrible, but many parts of the environment did look rushed. For example, acid pits looked like boring ponds of green water and many of the enemy character models could have had a lot more detail. In addition, although the large maps were nice to play in, they were devoid of any real details. There may have a burning cauldron here and a statue over there, but mostly I just felt like I was running around in a dank, brick building that was rearranged a bit in every level. 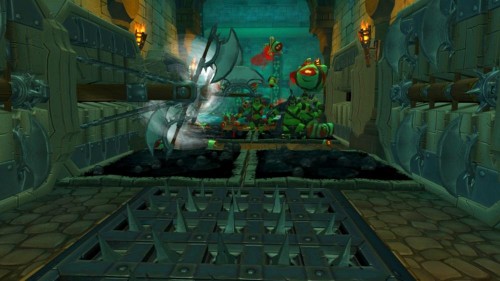 In conclusion, Orcs Must Die! is a solid game. The gameplay is fast, frantic, strategic and addictive. However, many times while playing through the game I felt that this game could have been a lot better if it would have had a longer development period. The lack of coop is criminal, and the graphics could have used some work. Whats more, although the story was adequate, it could have been expanded upon. In addition, combat variety could have been spiced up considerably. All in all though, this is a game that should definitely be tried, and if you have the money, consider buying it. If this game ever goes on sale, then pounce on it fast.

Its a Podcast, Capsule Computers Style! – We want your suggestions!