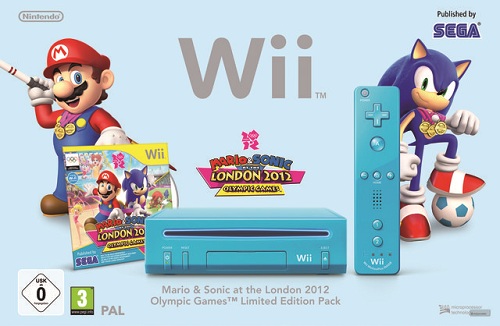 Despite the Wii being extremely late in its life and Nintendo seemingly ignoring any major game release support for the console, they are still planning on pushing out special bundles of the console with new game releases. To be more specific, Nintendo announced that they will be releasing a special blue Wii bundle in Europe this November for the release of Mario & Sonic at the London 2012 Olympic Games Eurogamer reports.

The bundle will include the game, the Wii remote plus and Nunchuk all of the same color. Also, of course, it will contain the Wii itself, but you may notice that this is a smaller Wii. The reason for this is that it is one of the new models that does not include GameCube support in any shape or form. At the time there has been no price released for this bundle, anyone want to take a guess?