Over the years, the Indie Game scene have been through more than a few platforms; a lot of which still exist in one form or another today, but most of which are only used by the most hardcore of old school code monkeys.

Nowadays, most independent studios use one of a handful of platforms. The most notable of which being Flash; the most widely distributed web-based plugin that enables us all to experience such wonders… Youtube, Newgrounds, Kongregate to name but a few.

There have been other sites highly promoting independently developed games, such as Steam, who provide their own handmade fully-featured engine Source to give back to the community, and enhance the quality of games available on their network.

There have been other platforms produced which see some success, such as Microsoft’s XNA platform, and their now deprecated engine Torque X. And still more engines designed to make it easier for people to get into the game development scene; applications such as Game Maker, and RPG Maker.

There is another, much newer candidate attempting to push it’s way into the hearts and minds of such indie game studios… That of the web itself [cue lightning].

In 2007, W3C (the guys who make the internet work) began work on a specification for the next evolution in web technology. They imagined an internet not confined and restricted to the use of 3rd party plugins and browser extensions, but of freedom, equality, and a system of health care… (cough)

So the idea was that rather than anything remotely interesting running through flash (a platform which to this day certain companies refuse to dignify with a license), there would be a universal standard… And understanding, if you will, to unite all browsers in growing a pair and being able to do more stuff. And over the years, and even though the spec is still being drafted, more and more of this wondrous awesomeness has been added into most modern browsers.

There are provisions for video (which Youtube have already begun to implement) and audio (which some sites like BandCamp are implementing), along with pretty style additions making sites look damn fine that much easier. They have also added a way to render complete images from scratch, all within the browser, in real-time! You know what this means, right? No? Then I’ll tell you…

With all these features being added to modern browsers, even mobile browsers like the iPhone’s Safari, developers can start to use them more and more. And they can use them to make a new breed of games.

At first, there were only a few isolated experiments on sites like Chrome Experiments dabbling in the brave new world of HTML5. Stuff like particle effects, or audio visualizations… just little bits to show off what can be done with the technology. But then people started making games with it. 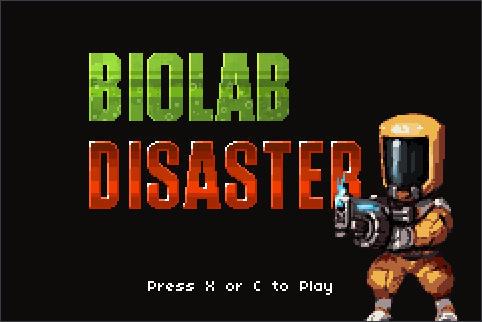 Biolab was among the first fully-realised games (even with it’s brevity) to come from the new standards, and it had everything… spritesheets, keyboard controls, even sound effects and soundtrack. A classic Metroid style platformer– and all you needed to play was a browser!

Since then, the technology has matured further; so much so that it won’t be long before games on par with those made in Flash will be commonplace. And the word has spread. Sites have sprung up, dedicated to this new gaming platform. Sites like HTML5 Games and Canvas Demos. There are even Game Developer Conferences in the works dedicated purely to HTML5 games, like onGameStart, and New Game.

With so many sites and communities spawning across the web focused on this new species of game, you can be sure to see bigger and better titles coming to a browser near you.