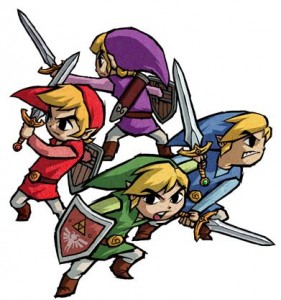 Back at E3, we learned that The Legend of Zelda: Four Swords would be coming as a free download to both the DSiWare and the eShop. At the Nintendo 3DS Conference that took place just minutes ago, a release date and an official name was given to the downloadable classic by Miyamoto himself.

On September 28th, “The Legend of Zelda: Four Swords Anniversary Editon” will be available on both platforms for every DSi, DSiXL, or 3DS owner to download. As we’ve mentioned before, this version is to be the same add-in that was bundled in with the Game Boy Advance title The Legend of Zelda: A Link to the Past and will have two to four players team together to take down the evil Vaati.