Metro: Last Light isn’t a game or franchise I’m very familar with, so I was going into this expecting nothing, but by the end I was really impressed with the game and the concepts behind it. It’s not your typical first person shooter, it’s not kill.kill.explore-repeat, Metro is more about the atmosphere mixed with abit of survival horror and FPS. In addition, it’s the prettiest game I’ve seen at TGS, by the time it comes out the developers are keen on it being the best looking game around. 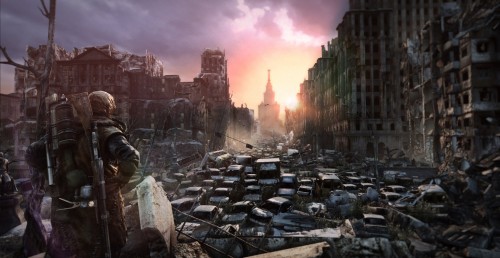 You can expect highly detailed environments; weather FX, stunning lighting and a consistent framerate. What more could you want? Well, how about more destructible things! The developers have improved the destruction in Metro: Last Light, more objects can now be destroyed and it’s not as intense as something like Red Faction, but it still looked pretty fun. Unfortunatley I wasn’t able to play the game, but the demonstrations were enough to gauge some of the new gameplay features. 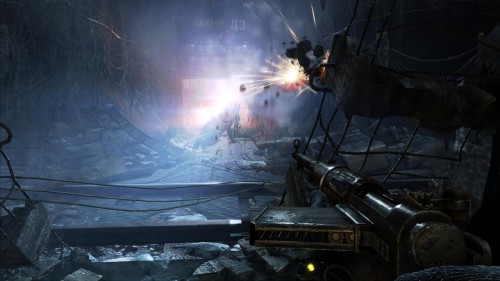 The developers are promising improved AI, a soundtrack that’s more dynamic to the environment, revisions of the stealth system and the possibility of multi-player. It wasn’t confirmed, but they alluded to the fact that they were working on it. More choice within the game was hinted as well, I know that the alternate endings in the previous game were abit disappointing, but ultimatley more interesting. Choices like that is something Metro: Last light looks to offer for longevity purposes, such as alternate paths to complete a sequence and similar open-ended paths that couldn’t be discussed.

As far as the story goes, it’s not based on the novels and it’s about a year after the original game. It also picks up after the “bad” ending from Metro 2033, the one alot of people didn’t like apparently. I saw the game running on PC, Xbox 360 and was supposed to see it on the PS3, but it’s hard drive had died for some reason. Maybe Metro: Last light is just way too intense? Who knows! But obviously the game looked alot better on PC, but it was still impressive on 360 regardless. The Xbox 360 and PS3 versions are fairly equal I was told, with both being better than the other in some areas. Overall I came out of there quite interested in a franchise I never have been before, that’s not something that happens often. Metro: Last light Releases 2012 TBA