This game is what the movie Bring it on would be like if they threw in some zombies, violence and candy. It’s pretty nuts, you slice and dice zombies and then they turn into rainbows, yep I just said that. Lollipop Chainsaw is graphically inspired by pop-art, sparkles fly as you dismember enemies and collect lollipops for health. It’s definitely the most over the top and original game I played at TGS, and the absurdity thankfully doesn’t ruin the fun.

Developed by Grasshopper Manufacture, the game comes from the mind of Goichi Suda whose worked n things like No more heroes and Clock tower, so it’s fairly obvious where the influence comes from. Not only that, Writer and director James Gunn (Dawn of the Dead, Tromeo and Juliet, Slither) penned the script, while Akira Yamaoka (Silent Hill) is doing music, however I couldn’t really hear much of what was going on. 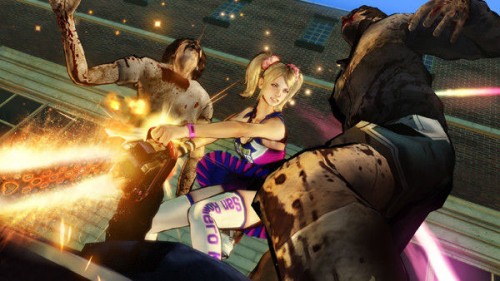 The combat is intense, finger bashin’ madness, even including some bitch slap combos on zombies. It’s evident the game is strange as soon as you pick up the control, however it gets weirder once the decapitations and rainbows begin, as well as the power up “star mode”. This looked sort of similar to Mario’s star invincibility, except it only made Juliet Starling (the main character) more powerful.

As I ran my way through the high school, I made small decisions on what doors to go through, I’m pretty sure whichever path you choose dictates what enemies you’ll face. I also fought a mini boss, which had me attempting to save a fellow student from a crazy zombie, the boss had a health bar unlike the normal zombies. I couldn’t exactly interpret a detailed version of the story, I unfortunately don’t speak Japanese and it doesn’t seem like the game is very narrative focused. It’s simple, zombie apocalypse, 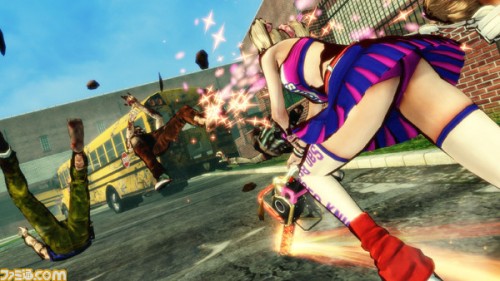 Oh yeah and did I mention the boss threw words at me like “F***in’ bitch!” and “C***s***er!”? That gives you an idea of the sort of humour we’re playing with here, I personally enjoyed the bizarre and over the top experience. It’s very Japanese, I had no idea what this game was until I turned around from playing Skyrim and decided I wanted to play Lollipop Chainsaw instead, I get the feeling many people might of felt the same if they saw the game. Lollipop Chainsaw starts its hilarious take on the zombie apocalypse sometime during 2012.