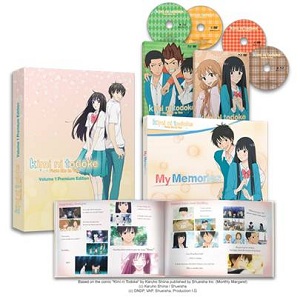 With the release of their last two anime packages, Arakawa Under the Bridge and Katanagatari, NIS America began bundling their premium edition anime releases with both the Blu-ray discs and the DVD discs. This practice was quite popular with fans, and the Blu-ray versions of the anime were visually pleasing. At that time however, there was no news of NIS America continuing this practice.

Well there is no reason to worry, because NIS America has announced that their release of kimi ni todoke will be bundled into a Blu-ray/DVD combo package when it is released early 2012. kimi ni todoke -From Me to You- Volume 1 Premium Edition will contain the first twelve episodes of the series on both 2 Blu-Ray and 2 DVD discs as well as a hardcover art book, My Memories all wrapped up in a collectible over-sized slipcase as seen to the right.