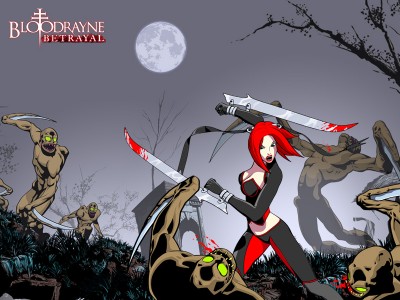 The time has finally come for the return of Rayne in Majesco and Wayforward’s Bloodrayne Betrayal. Today officially marks the release of the PSN version, which means those with the console can log in and download the full game as of now with the Xbox Live Arcade version launching tomorrow. Both of these releases will be priced nearly the same for both platforms, with the bloody side-scroller being priced at $14.99 for the PSN, and 1200 points for the XBLA.

Now if you have by chance been living under a rock and haven’t heard of Bloodrayne Betrayal as of yet, this game puts players in the role of the world-famous Dhampir Rayne as she infiltrates a secluded castle to put a stop to an evil master’s sinister plot. The last time Wayforward and Majesco got together for a re-imagining, we seen the simply delightful Boy and His Blob hit the Wii. While that title is far away from that with the over-the-top hack and slash action we see here (I really doubt there is a “hug” button”, the quality and retro vibe that have been displayed thus far have made Bloodrayne Betrayal shape up to be one of the most anticipated and promising downloadable titles to come out this year. So go! Download! Make a bloody mess, and keep an eye out for our review which is coming soon.