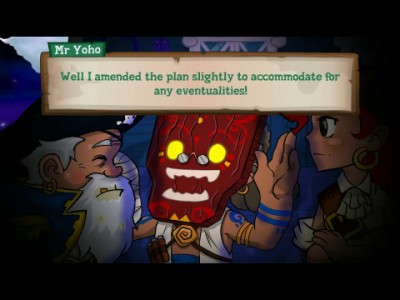 London-based development studio Mediatonic has announced 1000 Tiny Claws, its third PlayStation minis game for PlayStation Portable and PlayStation 3. It will be released on October 4 in the USA and October 5 in the UK and Europe. Expect to fork out £1.99 in the UK, €2.49 in Europe and $3.49 in the USA.

1000 Tiny Claws is a fast-paced arena brawler, putting the player into the shoes of Rana, a plucky sky pirate tasked with saving the lives of her ship’s crew by clearing stages infested with insectoid enemies – an accursed swarm that the crew may have accidentally released.

1000 Tiny Claws sees Rana having to save her captain and crew from the hangman’s noose after a judge rules that they’re responsible for unleashing a swarm of insects that threaten to bring about the apocalypse. To save her crew, as well as the small matter of saving the world, Rana has to clear a series of floating islands by making sure the infernal enemies infesting each stage fall to their deaths. Rana can draw on her sky pirate’s toolbox of combos, running attacks, special moves and dodges to dispatch her many-clawed foes, and she must keep her cool as the action ramps up into wildly frantic territory if she wants to keep her crewmates alive and break the curse of the 1000 Tiny Claws for once and for all.

Mediatonic is behind two critically accliamed Playstation Minis, Monsters (Probably) Stole My Princess and Who’s That Flying?!, which means this game could be another great downloadable title. Check out the screenshots below.