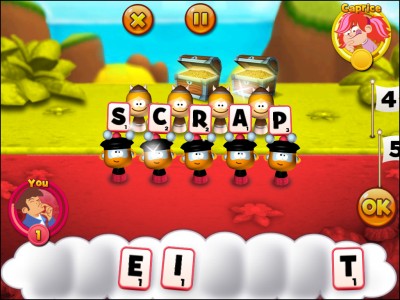 Like making up words? Own an iOS device? If you said yes to both, you might be interested in UTV Ignition’s latest iOS title by the name of Quarrel. Quarrel combines gameplay elements from the likes of Scrabble, Jumble and Risk to create one simple yet fulfilling word game.

In this title, players control territories filled with various troops where the main goal is to take over the opposition’s territories with your vocabulary skills alone. When an eight-lettered anagram is shown on the screen, it is the your job to quickly create high-scoring words and defeat their opponent. Whoever can dominated the entire map is then declared the winner. It sounds rather simple, but definitely different compared to what we usually see released in the genre. Denki (who developed the game) and UTV Ignition released a fresh batch of screenshots for their new word game, displaying it’s cheery art style and strategic gameplay. Quarrel is set to launch on the iPad/iPhone for $4.99 come late August. Check out the screens down below.

Real Racing 2 to hit the App Store on the 16th!