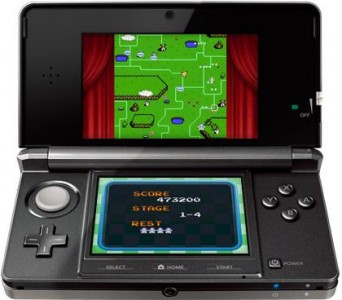 Those of you who have eagerly been waiting for word of the next 3D Classic to hit the 3DS Virtual Console are in luck as Konami’s Twinbee has been announced to be joining the rather small line-up on August 10th for Japan. Oddly enough, this top down shooter never officially released outside of the region (except in a Konami compilation game), so it may end up never crossing shores.

As you see in the picture above, instead of the 3D add-in, Twinbee will feature curtains located on each side of the top screen with the player’s score resting on the bottom. I certainly wouldn’t mind seeing Twinbee come out to the 3DS Virtual Console here, but I am still patiently waiting on some Kid Icarus or Metroid love at the moment. So now you tell us, is TwinBee a game you would buy on the 3DS?