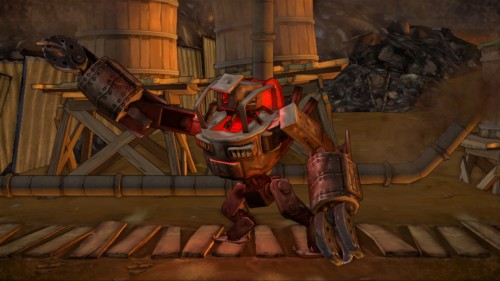 “Ubisoft is excited to be working with Demiurge Studios on the release of Shoot Many Robots,” said Adam Novickas, Director of Marketing at Ubisoft. “Ubisoft is focused on providing players with a strong and diverse portfolio of digital titles, and Demiurge is set to bring another amazing game to the digital space with Shoot Many Robots.”

Shoot Many Robots follows P. Walter Tugnut on his mission to kill as many robots as possible after a factory begins to ominously produce killer robots. With an RV full of guns and beer, gamers will experience a four-player co-op run-n-gun side-scrolling RPG shooter filled with tons of weapon and item customisation. Shoot Many Robots will also feature two game modes: Traversal, where players must progress linearly through a level, and Survival, where players fight against waves of robot hordes, delivering hours of robotic carnage and fun.

Ubisoft and Demiurge will be showcasing Shoot Many Robots at PAX Prime in Seattle August 26–28, 2011.

Why don’t you check out the game screenshots and video below.

Sesame Street: Once Upon a Monster’s Launch Trailer gets the kids Involved..