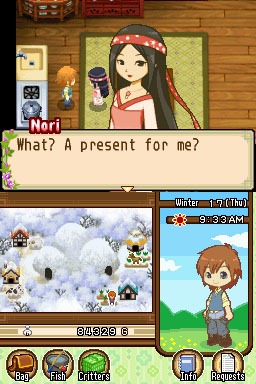 Why yes Nori, Natsume has a present not only for you, but for the rest of Harvest Moon fans everywhere. Hot on the heels of their release date announcement for Rune Factory: Tides of Destiny, Natsume has given the Nintendo DS version of Harvest Moon: The Tale of Two Towns a release date as well. Harvest Moon: The Tale of Two Towns will be released on September 20th which is only one week earlier than that of Tides of Destiny, which means September is going to be a huge month for fans of farming and romance.

For those who don’t know, The Tale of Two Towns is the first Harvest Moon game to let players select which town they choose to live in, either Konohana or Bluebell. These towns used to be friendly with one another, but began feuding over who made the best food, which caused the town to become rivals with one another. Also this title will be the first to feature the Alpaca as a raise-able animal, plus if you pre-order the title you will receive a stuffed Alpaca plushie all your own. At this moment of time, the Nintendo 3DS version of this title has yet to receive release date, though apparently one “will be announced shortly.”

Harvest Moon: The Tale of Two Towns rated in Australia