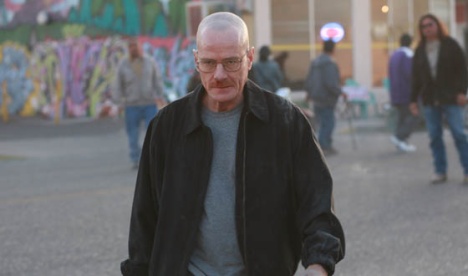 Hit TV series Breaking Bad, from AMC and Sony, will be getting a 5th and final season with production starting on the last 16 episodes early next year. With an Emmy award under its belt, Breaking Bad is all set to go where all good TV goes: off the air. Vince Gilligan, the show’s creator, had these words to say:

“It’s a funny irony — I’d hate to know the date of my own last day on earth, but I’m delighted to know what Walter White’s will be (episodically speaking). This is a great gift to me and to my wonderful writers. It’s knowledge which will allow us to properly build our story to a satisfying conclusion. Now, if we don’t manage to pull that off, we’ve got no one to blame but ourselves. Breaking Bad has been a dream job these past four years. Working with the best cast and crew in television has no doubt spoiled me for future projects. I’m lucky to get to work with them on sixteen more episodes, and I will always be grateful to both AMC and Sony Television, who from the beginning, believed in our show and supported me creatively and professionally. We have been able to take risks with Breaking Bad which would not have been possible on other networks.” “