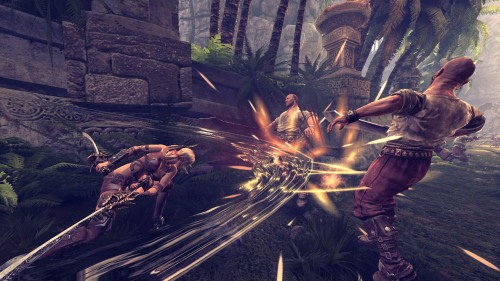 Back when Blades of Time was announced many people, including myself, were thinking that the game would be a sequel to X-Blades. This was due to the fact that both games featured the same main character named Ayumi who had a relatively similar appearance and the game was from the same developer. That won’t be the case apparently because a Konami representative told Siliconera that both Konami and Gaijin Entertainment, developer of the title, figured it would be best to drop the anime look that Ayumi had in X-Blades and update her weapons.

In Blades of Time, Ayumi will be using a sword and a rifle separately and is also a treasure hunter. In X-Blades Ayumi used gunswords (guns with swords attached similar to FF8) and was after certain powerful artifacts. This means that although some things have been tweaked a little, and a major graphical overhaul, it may still feel similar to X-Blades. The title will allow players to create something called a “time rewind clone” which will perform the last actions you did, meaning you can use your cloned form to deal out double the damage to an enemy or a boss or solve a puzzle that would usually involve two people. The game will be released some time early in 2012 and will be available on both the Xbox 360 and the PlayStation 3.

Alice: Madness Returns unsurprisingly gets an M rating from ESRB