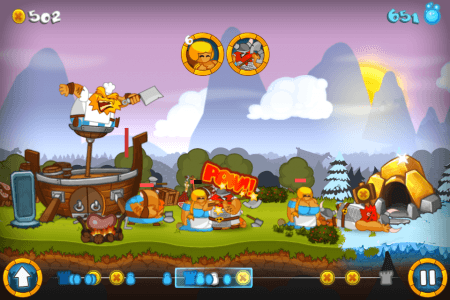 Move over Horrible Histories, Swords & Soldiers is now available on the App Store featuring a range of barbaric warriors for iOS users to command at the touch of a finger. Swords & Soldiers is a funny, action-strategy game for the iPhone and iPad. The game features an army of Vikings who are out on a quest to create the ultimate BBQ sauce, the Aztecs who are out to defend the Holy Pepper and lastly Chinese warriors who manufacture explosive Chinese toys. Build your own forces and defeat your enemies using berserkers, dart blowers, giant boulders, ninja monkeys and many more. Swords & Soldiers contains hilarious characters and storyline, split screen multiplayer for iPad, three epic campaigns with unique challenges, fully customisable Skirmish mode and full Game Center support. Published by Chillingo, developed by Two Tribes and based on the original by Ronimo games, Swords & Soldiers is available on both iPhone ($2.99US/$3.99AU) and iPad ($4.99US/$5.99AU) now. Stay tuned to Capsule Computers for a review of Swords & Soldiers coming soon.