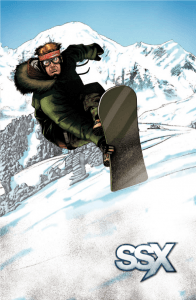 Electronic Arts is throwing all their considerable muster into making the newest and next version of SSX the most successful, critically and sales wise.   In addition to the massive showcase at E3 2011, EA Vancouver has been slowly revealing the new characters that will be made available in the sequel.  The newest character reveal is named Psymon.  Yup, it is a weird spelling, but the SSX franchise has never been one for realism.  What do you think of the new guy on the mountain?  Let us know in the comments below after you’ve checked out his showcase gallery down below.  Oh January. Come faster!

Shaun White Skateboarding in RL, don’t try this at home