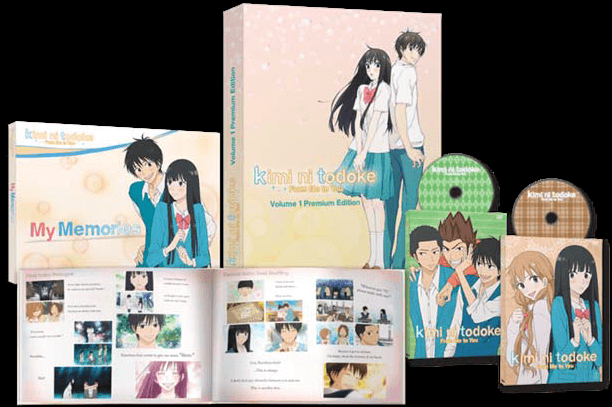 You may remember that last week NIS America had acquired the licensing rights of kimi ni todoke and would be releasing the first part of the series later this year. Today NIS America detailed their acquisition further by announcing that kimi ni todoke (From me to You) Volume 1 Premium Edition will be released on October 25th in a Premium Edition package. The first volume will contain a full color hardcover art book that will contain the character’s information as well as main character Sawako’s cherished memories. The first 12 episodes will arrive on 2 DVDs and will be subbed in English but contain their original Japanese dialogue.

kimi ni todoke follows a young girl named Sawako Kuronumaha. Sawako has always had a difficult time fitting in with those around her, whether it be her quiet way of talking, her hair or even the fact that her name is similar to a Japanese horror series she never has had many friends. That is until she meets Shota Kazehaya who treats her like a normal girl. With Kazehaya’s help  Sawako finally begins to make some friends, however with her new found social life comes many pressures which will trouble the young girl throughout this slice of life style anime.