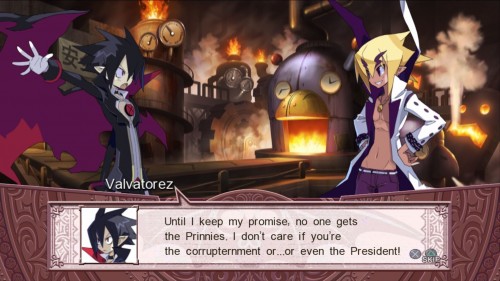 The Disgaea series has always had a very unusual sense of humor. It appears that Disgaea 4: A Promise Unforgotten will retain this humor thanks to the recent rating released by the ESRB. The ESRB has given the title a T rating for Animated Blood, Drug Reference, Fantasy Violence, Language, and Suggestive Themes.

The suggestive themes obviously come from the games dialogue, though whichever character had the guts to call one of the other characters flat chested better watch out for Etna if she is around. Check out the full ESRB description below.

This is a strategy role-playing game in which players control a group of characters on a quest to bring order to the Netherworld. From a 3/4–overhead perspective, players use swords, axes, and magic spells to engage monsters and human-like characters in turn-based combat (e.g., selecting attacks/weapons from a menu screen). Battles are accompanied by light effects, slashing sounds, and cries of pain; enemies disappear when defeated. One special attack depicts a bullet striking an enemy’s head, which is accompanied by slow-motion and X-ray effects. A few cutscenes depict brief stylized blood effects (e.g., an armored knight emitting blue droplets after getting impaled; the silhouette of blood splatter after a character is struck).

During the course of the game, some of the dialogue includes suggestive comments (e.g., “You’ve earned the right to be called a pervert, by sneaking around and peeping on us,” “I just love it when men do things that constitute sexual harassment,” and “You’re so flat, they use your chest to measure if a shelf is straight!”). The game also contains a brief drug reference (e.g., “If you inhale my dust, you’ll get really happy. It might even make you feel like you can fly . . . Just say no, kids! Bad! Bad drugs!”). The words “sh*t,” “a*s,” and “b*tch” can be heard in dialogue.

The 3rd Birthday gets rated by the ESRB; torn clothing and blood