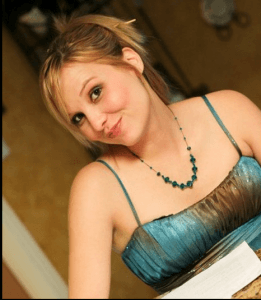 In some terrible news,  28 year old Funimation voice actress, Cassandra Hodges has passed away just over a week ago on June 27th.

Cassandra ‘Cassi’ Hodges was a much loved member of the Funimation team and had a bright future ahead of her with brilliant roles in anime series such as Full Metal Alchemist: Brotherhood, Hetalia: Axis Powers, Hell Girl and One Piece.

The news supposedly broke when Christopher Ayres, her fellow Funimation cast member, had posted a status to his Facebook page about the news. The news then spread like wild-fire with many misinformed articles claiming Ayres to have been the first person to know of her passing and also giving the impression he was posting the news against her families wishes. He has hit back at said media outlets through his Facebook page here.

Her cause of death is being kept from the public per her families request. She was set to appear at the Anime Festival Wichita this week alongside fellow Funimation voice actors, Eric Vale and Troy Baker.

This news has struck the anime community deeply. Cassandra had such a bright future, which was evident in all her work and tragically it was cut short. She may be most remembered by the anime community as the characters she has played but let’s take a minute to remember who she was as a person.

She was a beautiful young women, who followed her dreams as an actress, starring in many stage-productions, commercials, radio and of course anime productions and even dabbled in modelling.

Not many people know that when not acting she worked as a Vet Tech,  taking care of the animals which she treasured so much. Her love of animals has been noted several times by many of those who knew her.

She will be greatly missed, both for her work and for the person she was. She was a young women taken too soon. Our deepest condolences go out to her family as they mourn her and to her fans who also mourn.

A memorial fund has been set up to aid her family and can be found here. Also fans can send condolences to her family here.

Rest in Peace, Cassi. You will be missed.