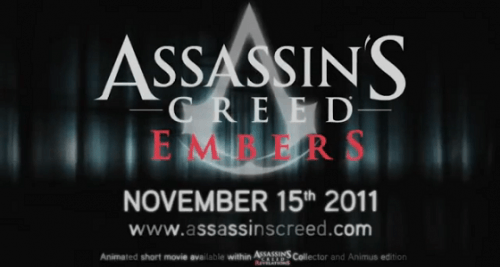 Today Ubisoft revealed that they have been working on an animated short film called Assassin’s Creed: Embers and they also released a bit of a trailer to let it know what it will be about. Ubisoft says that the film will “expand on the final chapter of the life of master assassin Ezio Auditore.”

You can catch the trailer below, though you will be able to get the film itself when the game releases on November 15th. The film will be bundled with either GameStop’s Assassin’s Creed Revelations Signature Edition or you can purchase it separately from the Xbox Live Marketplace or PlayStation Network, though no price was given at this time for how much it will be.