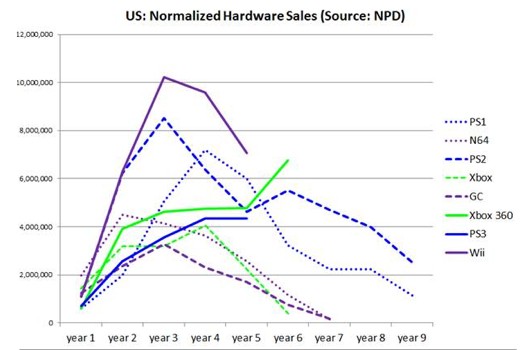 Not every press release from a company has to do with the games they are developing, sometimes they like to show off how well they are doing too. Such is the case with Microsoft today when they announced that the company has sold 55 Million Xbox 360 consoles around the world as well as 10 Million Kinect Sensors and 10 million Kinect games.

With this announcement they also released the above graph which shows that despite other consoles of this generation the Xbox 360 is actually still rising unlike the PlayStation 3 and the Wii (look at that drop). This graph is reinforced by the fact that the Xbox 360 has been the best selling  console for ten of the past eleven months in the US. It’s good that they are getting all these graphs out of the way now, so they won’t have to show them off at E3 next Monday during their conference.