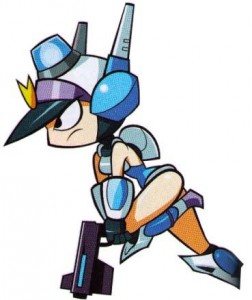 Whenever I hear any news that includes Wayforward and an original title, my face is usually grinning afterwards. Wayforward have been behind some of the better games on the DSiWare such as Shantae, Mighty Flip Champs, and the more recent Mighty Milky Way that just seen a release on the service a little over a month ago. In the most recent Nintendo Power, Matt Bozon revealed Mighty Switch Force, which will put players in the role of law enforcer Patricia Wagon, coming exclusively to the 3DS eShop.

Mighty Switch Force borrows a bit from Metroid and is being by many members of the same team that worked on Contra 4, with a seemless integration of puzzles that will fully utilize the 3D feature on the system while Space Hooligans meet their doom thanks to the fiesty protagonist. There hasn’t been an official date yet for what is sure to be another fantastic entry into Wayforward’s resume, but stay tuned as I’m sure more updates will be coming shortly.