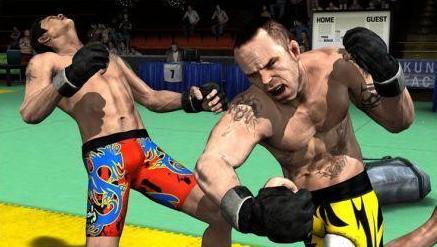 505 Games have a lot to show off this year at E3, and the most dominate title in the line-up is without a doubt the upcoming Supremacy MMA. During E3, more details were revealed for the Supremacy MMA that show that this release of the popular sport is not to be messed with. There are quite a few features that set Supremacy apart from other contenders in the market, with the most prominent being the arcade-like speed, allowing for more action-packed match-ups with even more destructive results.

“From our first announcement of the game until now, Supremacy MMA has been the only MMA game to deliver true-to-the-sport-brutality and arcade-like speed, and we’re the only MMA game coming out in 2011,” said Ian Howe, President, 505 Games North America. “We know exactly who we are: M-rated and proud of it. We’ll drive that point home even further when we debut our brutal KO finishers and show off the depth of our movesets at E3.”

“We know exactly who we are: M-rated and proud of it.” I love to hear that line. It certain shows that Supremacy MMA know their target market and are ready to pull out all the cards to deliver the best product possible. MMA fans will also find comfort in knowing that familiar faces such as Jens Pulver, K1 kickboxing legend Jerome Le Banner, and the first real female fighters in an MMA game, Felice Herrig and Michele Gutierrez will all be fully playable, ready to deliver the “brutal” knockout blows.

Pre- Order details were also revealed at the event:

Pre-order Supremacy MMA at GameStop and expand your roster of fighters to include undefeated fighter Shane Del Rosario. Pummel your opponents as this invincible 6’4’’, 250 pound fighting machine. Known for both his incredible strength and speed, Del Rosario holds the distinction of being the first American to become the WBC Heavyweight. His flawless record is crowned by the fact that every single one of his fights end in a KO or Submission, with only a single fight making it into the second round. Make them submit! Pre-order today!

Online Customers: A code with instructions on how to redeem SHANE DEL ROSARIO will be emailed to you when your game ships.

Store/In-Store Pickup Customers: A code with instructions on how to redeem SHANE DEL ROSARIO will be printed on your receipt at time of purchase.