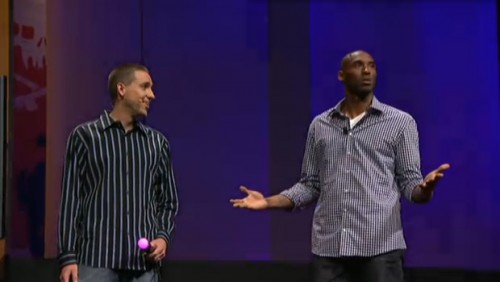 Sony’s E3 press conference today wasn’t lacking in star power. They announced that the PlayStation Move will be supported in 2K sports’ next title which will be NBA 2K12. With this announcement also came a video demonstration of the PlayStation Move integration, which they believed was best highlighted by bringing Kobe Bryant on stage to play NBA 2K12 against one of the game’s developers.

The implementation of the Move feature is called NBA on the Move and it will allow players to move the target to any player and allow you to either tell them to pass to that character, or take a shot with the best of their ability. Also players can choose to block a ball with a pull of the trigger or switch characters and defend against the other players’ attempts to score. Kobe Bryant unfortunately didn’t seem to have a whole lot of time to practice in the back before they placed him in front of the crowd however as he didn’t seem to know what he was doing, also the implantation looked to be a bit bad from what was shown at the time. Hopefully Sony will work out the kinks before NBA 2K12 releases to stores on October 4th of this year.