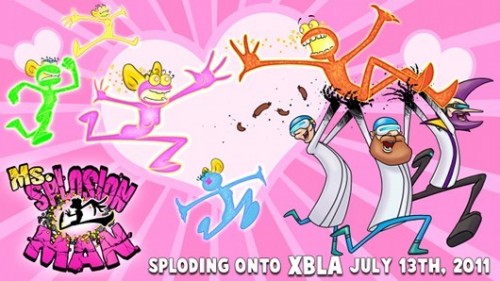 For all those waiting anxiously to ‘splode all over the place, hold it in a little bit longer. Twisted Pixel announced today that Ms. ‘Splosion Man will be released next month onto the Xbox Live Arcade on July 13th. Ms. ‘Splosion Man is the sequel to the popular 2009 game and is packed with fifty single player levels as well as fifty co-op levels that can be played with up to four other people.

These people can play either locally or online, meaning you could have a room full of ‘sploding people. Sounds a little messy. There was no price given at the time of this announcement but the original ‘Splosion Man cost 800 MSP. Also have to hand it to those scientists in the picture up there, they really are committed to capturing ‘Splosion Man. So much so they are ignoring the fact their hands are black and skeletal.