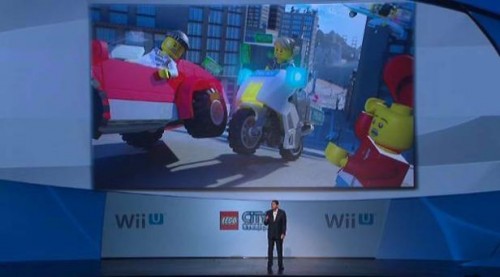 When the Wii U was announced yesterday during Nintendo’s big E3 conference, many were at the edge of their seat to see the first game headed to the new console. Shortly after, Reggie announced Lego City Stories, which will be published by Nintendo and developed by TellTale Games. Though a Lego game isn’t quite what we were quite expecting for the first Wii U announcement, it still looks to have some promise even though details are still sparse at the moment.

Lego City Stories will be the first Lego game in a complete open world. Honestly from the small bit of footage we were shown, it looks to sort of resemble GTA as it has a very similar HUD and of course is based in an open world city environment. I enjoy many of TellTale’s lego titles for the most part and being on the Wii U, Lego City Stories could have a ton of interesting features attached. There still is quite a wait ahead for Lego City Stories at the moment though as it should launch with or shortly after the Wii U in 2012.