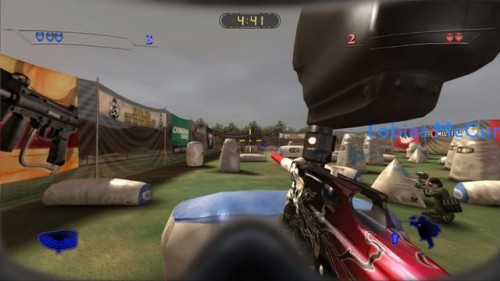 Last year, we reviewed a little game by the name of Greg Hastings Paintball 2, which turned out to be a worthy entry into the series that over time has defined the sport on consoles. However, up until today, the only way you could play the game was on the Wii or 360 as the PS3 never seen a release. Majesco were dedicated on keeping the Sony paintball fans happy though and have now released Greg Hastings Paintball 2 (with newly added Move support) on the PSN.

This version includes all the same features as the 360 version, but with Tournament Speedball, Recball, and Tournament Woodsball added in as well as the many gun types with paint grenades and rocket launchers. Players can also lead their 10-player team to victory by leveling up their stats, performing trades, and issuing commands on the field. Multi-player is also available in this version, which 14 “ballers” can prove their worth in heated online paintball battles. You can now download Greg Hastings Paintball 2 on the Playstation Network for a nice low price of $19.99.