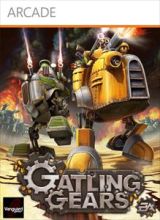 Missiles, bombs, tanks and torches take center stage in the twin-stick shooter Gating Gears as it launches in North America on the PlayStation Network for $9.99. It is also available on XBLA  for 800 Microsoft points. Previously, the game released for the price of 1200 MS Points but it is now permanently reduced to the lower price. This top-down shooter  “has gamers blasting their way through 30 unique environments armed with a deadly arsenal of weapons including a gatling gun, grenades, rockets and power-ups.”

Gatling Gears was made by Amsterdam-based Vanguard Games in collaboration with the Electronic Arts Partnership program.  Check out our review of the game here.  We gave it a 9/10.