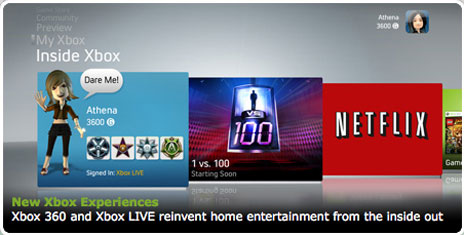 This isn’t really surprising news, more and more people tend to stream content to Xbox 360’s from their PC’s and the rise of digital distribution also helps the statistic. Microsoft posted this just before E3, which was intended to flaunt strategic vision for the conference more than anything else. While people are still playing lots and lots of games, 40 percent of all Xbox activity now is non-game. Put another way, Microsoft is seeing an average of 30 hours of video consumption per month per Xbox, a number that is growing fast. In Microsoft’s original blog post, they tend to waffle on about how this has been their strategy all along and discount the fact that alot of this probably has to do with torrenting. It’s not exactly a “new era” of entertainment as they put, however I think consoles are going to become vital in the digital distribution of films and effectively phase out rentals in the future.

But it is an interesting statistic and probably something you’d find the PS3 shares with its competitor. Microsoft also go on to talk about other stats such as selling 53 million Xbox 360 consoles and that the Xbox has been the top-selling console in the last year. There are more than 30 million Xbox LIVE members and more than 10 million Kinects have sold to date, good selling stats hey? I’m assuming alot of people watch movies on their Xbox 360 more than anything, whether or not they were paid for is another question, one stat that Microsoft strategically chose not to reveal.