Sick of the no-nonsense macho attitude of CoD, Homefront, and Generic War-Themed Shooter #37? Well, the long-retired Duke of exaggerated manliness is on his way to fix that, but if you can’t wait until June for some comic relief in your gaming, here’s our list of games with a sense of humour. 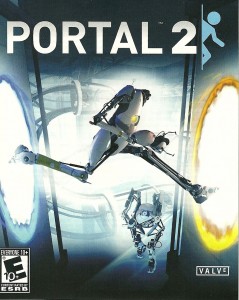 No combat. A female protagonist. A bland laboratory setting. A potentially confusing core mechanic. A three or four hour completion time. Present this list of features to a publisher, and you probably won’t get far. From a marketing point of view, backing Singstar: Justin Bieber is a safer bet. And yet the entire gaming world is currently obsessed with Portal 2. It goes to show that the annual exploitation of tried and true formulas (I’m looking at you, Activision!) isn’t always the best business practice.

The idea risked attempting too much, subverting too many conventions, and collapsing in a pile of its own pretentiousness. But in Valve’s very capable hands, the original mechanics from this clever indy project were combined with an unexpected sense of humour. The end result is an undisputed classic game.

Most of the humour comes from the deadpan delivery of thinly veiled threats, from GLaDOS, the creepy AI voice guiding the player. As her disposition changes from nurturing, to slightly homicidal, to full-blown homicidal, she earns herself the title of one of gaming’s most interesting characters.

The sequel’s addition of Stephen Merchant’s voice as Wheatley, the emotional, rambling personality sphere, serves to complement GLaDOS’ deadpan hostility. I haven’t had the fortune to play Portal 2 yet, but from the unanimous feedback, and the videos I’ve seen, my expectations are high – and I’m not worried about the game not meeting them. 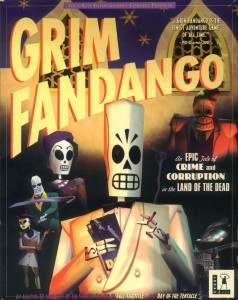 Every game from the mind of Tim Schafer deserves a mention on this list, but Grim Fandango is the standout one for me personally. Never one for point-and-click adventure games, I’m not sure if ingenious puzzles are characteristic of the genre, or if those in Grim Fandango are particularly clever. Either way, they are the perfect balance of being challenging without being too obscure, so thinking logically about a situation usually results in success.

But of course, the setting is where the game shines. With characters and narrative elements from classic film noir, and set in the afterlife as imagined by the Aztecs, there really isn’t any other game visually comparable. Players take the role of Manny Calavera, a reaper/travel agent who picks up souls from the land of the living and tries to sell them the best travel package for their journey across the land of the dead.

Despite a rather “grim” setting (sorry, couldn’t help it) the dialogue is light and playful. The demon Glottis, Manny’s driver, is particularly entertaining. With the appearance of a large demon, but the innocence and impressionability of a child, getting Glottis away from something fun or into something scary is the basis of several puzzles in the game.

If you haven’t had the opportunity to play this game, track down a copy. It didn’t perform too well commercially, but maintains a strong cult following regardless. It doesn’t seem to be available on the usual download services like Steam or Xbox Live, but look on Amazon or eBay. It’s well worth the effort.

Another fantastic example of fun gameplay made better by a great sense of humour and sharp dialogue. While the two later games declined in gameplay quality, the only element left intact was the humour and dialogue.

The first game is set during the UFO hysteria sweeping America in the 1950s, as players control Cryptosporidium 137, a Furon sent to Earth to harvest humans to replenish their degrading DNA pool. This involves using all the classic sci-fi clichés; abduction, body snatching, anal probing, brain scanning, and of course, taking off in your flying saucer and causing massive damage from above. It both parodies and pays homage to classic alien movies, and delights in breaking the fourth wall, drawing attention to and questioning video game conventions. For example, after being asked what happens to the bodies of his many, many victims, Crypto admits, “I don’t know. I thought they just disappeared when I went round the corner.”

Each game takes place in a different period of history, as the Furons slowly take over Earth. The first is set in the uptight, UFO-obsessed ’50s, the second in the swingin’ ’60s, and the last two in the ’70s. Each game sends up the cultural and political climate of each era, and although the series has been dormant for a few years now, I would love to see them take on the ’80s.

The banter and bickering between Crypto and his leader Orthopox, who advises the player from the mothership in orbit, is a rich source of cheap laughs as well. All up, if you can endure the unpolished turd that is the third game, and the buggy mess that is the fourth, I recommend a playthrough of the whole series. Or at least the first two – their awesomeness is undisputed. 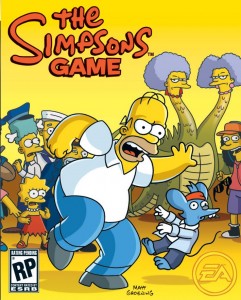 The Simpsons Game (2007, Every platform known to man)

Games based on licenses are often disregarded immediately, and rolling a cynical eye at The Simpsons‘ latest interactive adventure is understandable. And while the gameplay may not be more than standard third-person platformer fare, the story and dialogue more than makes up for it. But that is to be expected, with several writers from the show penning the script, and the entire cast on board.

The Simpsons Game has our favourite yellow family realising they’re in a video game, and after initially using their newfound powers for their own selfish deeds, realise only they can stop an invasion of Earth by Kang and Kodos. They venture into other Simpsons games, and attempt to speak to the “Creator” – Matt Groening, playing himself.

The game parodies many classic games, with levels such as Grand Theft Scratchy, Medal of Homer, and mini-games reminiscent of Frogger and Space Invaders, all with a familiar Simpsons-esque twist. It even sends up the games industry itself, with elements like sequelization (the characters rush to save 8-bit versions of themselves from becoming obsolete), excessive violence (Marge cleans up a GTA-style game to make it family-friendly) and portrays creators as boss fights, including Will Wright (creator of The Sims, Sim City), Matt Groening (creator of The Simpsons) and finally, the characters face off in a game of Dance Dance Revolution against God himself.

Strangely, companies like Rockstar actually complained about their games being parodied. And if a company as apparently cool as Rockstar has issues with commentary on the games industry, that’s a sure sign that not enough comedy is being done in the video game world. Unfortunately, I just found out that a planned sequel was cancelled, as recently as last month. Let’s hope someone else picks up the slack and gives the industry the grilling it needs.