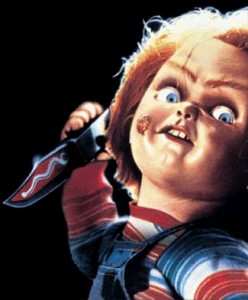 There’s been a flood of games recently based on movies from the 80s and 90s, such as Ghostbusters, Back to the Future and Jurassic Park. And now TikGames have announced they are currently developing a game based on a film franchise that has never been adapted to this medium: Chucky.

The game will be released onto PC and console for digital distribution in fall (September/October/November), and will allow players to control the murderous doll on one of his rampages, following an original storyline and using a creative set of methods to stealthily murder the probably-undeserving victims.

The developers state that “in the end, it will be up to the player to decide how many (or few) people survive this stealth-action romp.” This may be nothing more than creative publicity speak, but it hints at something more interesting than simply murdering everyone in sight. This is pure conjecture, but maybe it will be a stealth game in the vein of Hitman, giving players multiple murder methods to explore in each situation, including not killing them at all. This could make it an interesting title, if it avoids the usual pitfalls of licensed games.

Back to the Future: The Game price and release info revealed