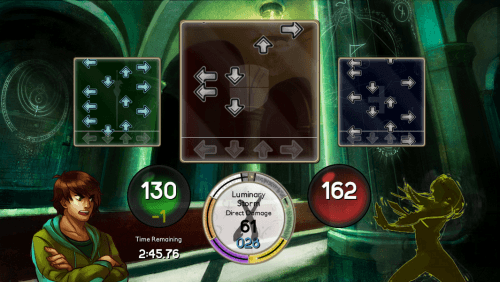 As evidenced by my review of SHMUSICUP, I’m a big fan of rhythm games or games that can incorporate rhythm elements. While there are few big names out there making these types of games, the independent scene is always more than willing to provide. Sequence, a game planned for release this month on the Xbox Live Indie Games service, offers promises of rhythm and roleplaying to excited a frothing masses. Alright so maybe it’s more of a niche title than that, but come on, how can you not be excited? Imagine combining Rock Band/DDR with classic roleplaying elements all for only 3 dollars American.

The game, developed by indie company Iridium Studios, has surprisingly high production quality for an XBLIG release features 12 hours worth of rhythm gameplay with 28 music tracks by Ronald Jenkees and Michael Wade Hamilton, as well as 90 minutes of fully voiced dialogue and compatibility with guitar and dance pad controllers. Iridium recently released a trailer along with a walkthrough to help explain how they combine these two very different styles of gameplay. Even if you have no interest in the game, do yourself a favor and check out the below video, which contains some of the funniest voice over I’ve heard in a while. Watch the video at the bottom of this post to check out Sequence, and then head to Iridium’s website for more information and screenshots.