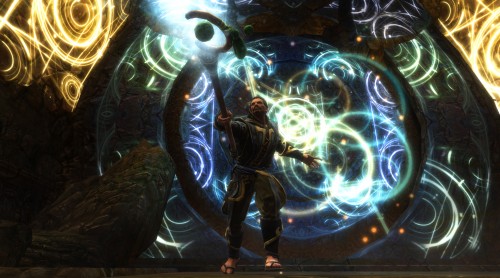 Kingdoms of Amalur: Reckoning, the upcoming action RPG from EA, has a pretty solid pedigree behind it. The game is being developed by 38 Studios and Big Huge Games and is in the very capable hands of people like Ken Rolston, R.A. Salvatore, and Todd McFarlane. Rolston will head up the design of the game, following a prestigious career as lead designer of both Elder Scrolls III and IV. Salvatore, best known for penning Forgotten Realms and DemonWars, will write for the game. Most exciting for me personally, Todd McFarlane, creator of comic legend Spawn and more recently Haunt, will be handling the art for the game.

If ever a team could be assembled that is more than capable of creating a truly epic experience, it is these three men. That’s not what has me excited about Kingdoms of Amalur however. The newest trailer for the game, titled Visions, is what really gets my nerd juices flowing. As a fellow Capsule Computers editor put it, it looks like what Fable should have been. The action is fast paced and the designers have compared it to God of War for the more sophisticated gamer (my words, not theirs). Players will need to use strategy and roleplaying elements in order to survive in this kingdom.

EA has also released two new screenshots along with the trailer which show off the tone of the game. The first, shown above, shows the player as a mage doling out magical punishment. The second screenshot, below, depicts the protagonist next to a pile of corpses which he’s recently crawled out of after being resurrected, which is where his story begins. Seriously, is anyone surprised that Todd McFarlane is working on this? Why won’t that guy let anyone just stay dead in peace? 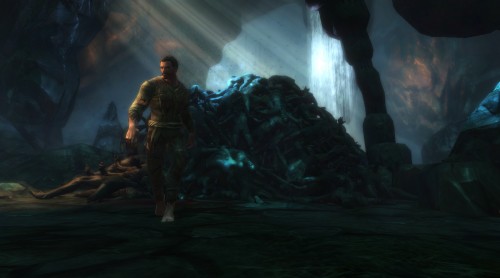 Interview with Lead Designer of Kingdoms of Amalur: Reckoning