I have had my Nintendo 3DS for nearly a week now and I have loved nearly every second of it. The 3D actually works great, the AR technology is really a sight to see, and the system itself has a nice new interface that is really sharp and impressive. My only problem personally has been one thing that it seems that many who have the 3DS are experiencing, the dreaded “Black Screen of Death”. How do you know if you run upon this annoying error? Here is my experience with the error and what you might be able to do with preventing it.

Just what is the Black screen of Death?
First thing you should know is that this is the worst name for an error I have ever heard of. The error WILL NOT brick or kill your system. What happens is during certain titles (usually third-party titles to be exact), the 3DS will just go completely black with this image popping up on the bottom screen: 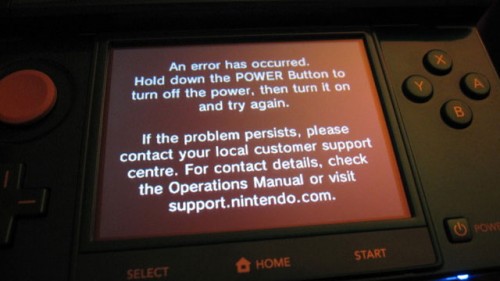 No one is quite sure of the cause as of yet and the cure is as simple as following the instructions to actually reboot the system, but I have found it coming back on a regular occasion, especially during Rayman 3D and Super Monkey Ball. It is very annoying, but by no means is this a reason to return that 3DS just yet as the villain in this case just might be a firmware update.

Updating
Last week Nintendo released an official statement after this error started popping up across systems nation-wide that the best thing to do was to simply update and the problem should be solved. Well, my problem is I didn’t even experience any errors whatsoever until I actually updated to start with, and based on conversations I have had with the staff here at Capsule Computers as well as other owners of the system, this update just could be the actual cause.

Some though are stating they have had this bug from the start though without even updating which really confuses the situation of just what the root of this problem could could be. The main problem though is the crowd looking in on this situation seem to be inflating this bug to be the system killer of the 3DS, which it is not. It is however very annoying to play a game for more than an hour and lose all data due to a glitch, so something should be done, and hopefully soon.

So I got it…What do I do now?
Playing your 3DS and enjoy it for what it is now is really all anyone can do at the moment. If this really upsets anyone too much, send an email to Nintendo Support, call their hotline at  1-800-255-3700 and try to not let it get you down. First party Nintendo titles as well as Street Fighter IV 3D do not seem to be having any problems whatsoever, so my best advice is to just wait patiently for the inevitable update to come through and soon enough, this will be just a thing of the past. Also try to remember that the 3DS is barely a week old now and it does take a bit of time to fix these things.

I was honestly a bit rash with this and took my system back before doing my research, got a brand new unit, ran a system update, and got the same error again so it does really look to be just a glitch in firmware. Learn from my goof-up on this one, DO NOT RETURN YOUR SYSTEM.

Many are also reporting that switching off Wi-Fi completely eliminates the problem as well, so that is another easy fix for those wanting to play some of the reboot heavy titles that this bug seems to effect.

Hopefully this is just a minor issue and Nintendo seem to know about it fully, so it is only a matter of time before we see some kind of a fix for it. Stay tuned as we will be following this more and once a newer update rolls out, we will be sure to let you know.