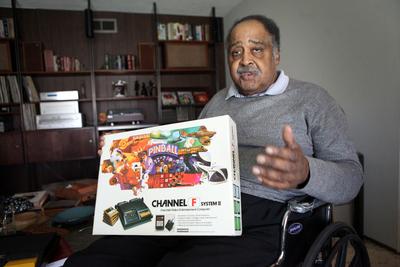 Jerry Lawson, shown above holding the Fairchild Channel F, died yesterday, April 11, at the age of 70. The Fairchild Channel F was a revolutionary video game console of the 1970s which introduced programmable cartridges as well as boasting one of the most impressive controllers of the decade. Prior to the Channel F’s release, all consoles could only play games that were built into the system. The ability to sell additional games separately was all thanks to Jerry Lawson. Lawson was also known as one of the only black engineers and inventors working in the early days of the video game industry.

Jerry Lawson had a long career in electronics and engineering, working for companies such as ITT and Fairchild Semiconductor. In terms of pioneering ideas, Lawson definitely had more than the lion’s share in the electronics industry and he gained a lot of respect among his colleagues, including Atari founders Nolan Bushnell and Alan Alcorn. Gerald Lawson was about as awesome as a man can get, as evidenced by this 2009 interview with Vintage Computing & Gaming. Gamers everywhere owe a lot to Lawson, and he will be missed by many.